Anchor rand view: Developments in China and the Fed weigh on the rand 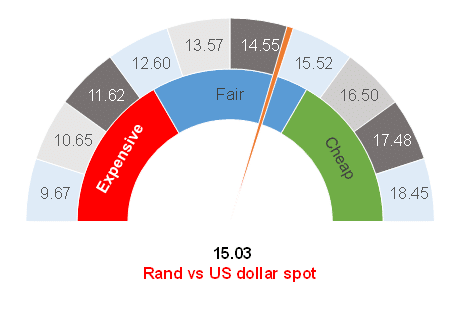 The rand was trading at R15.03/US$1 on Tuesday (28 September) morning, which is slightly above our fair range of R14.50-R15.00/US$1. Last week saw the US Federal Reserve’s (Fed’s) Federal Open Market Committee (FOMC) meet to discuss US rates and the South African Reserve Bank’s (SARB’s) Monetary Policy Committee’s (MPC’s) decision to keep local rates on hold. In the end though, it is concern around the economic health of China that is dominating emerging market (EM) sentiment currently. As a high-beta currency, when EMs are down, SA tends to lead the pack with the rand weakening more than most currencies against the US dollar.

China’s shadow banking system, which refers to underground financial activity that takes place outside of traditional banking regulations and systems, has been a topic of discussion on and off for a few years now. China has one of the largest shadow banking industries with between 30% and 40% of that country’s outstanding loans tied up in shadow banking activities. Retail investors are lending money directly to property development companies that buy and develop land before selling off the apartments to families and investors. This system has worked well as property prices have been increasing, developers have been funding themselves with increasing amounts of debt and there has been a steady demand for the new homes that are being constructed. Sensibly, China’s regulator has placed limits on the amount that these property developers may borrow from the shadow banking system, which coincides with a period where property price growth is slowing down. The limited access to debt and a slowing property market will inevitably mean that some developers will face financial stress.

Evergrande, the second-largest property developer in China, is having severe cashflow problems and there is a real risk that this developer will be unable to repay the amounts it has borrowed from the shadow banking system. China’s regulator has stepped in and is pushing Evergrande to complete existing projects and to pay down the loans that it has received for those projects. The company might survive, or it might not. Either way, its financial issues were a catalyst for investors to start asking questions about the health of the Chinese economy. Perhaps the most important consideration is that Evergrande is a massive borrower in the shadow banking system. The fact that it is considered too big to fail as a default will have long-lasting and devastating impacts on the welfare of thousands of families that are invested in its property developments. In addition, it might be big enough to take down China’s shadow banking system by itself.

As part of the Chinese regulatory overhaul, China is looking to reduce its reliance on coal and other fossil fuels. This transition is not going ahead without a few glitches, and we are seeing evidence of certain industries and sectors being asked to scale back on energy consumption for now. Imagine a China with controlled loadshedding. Inevitably, this acts as a handbrake on economic growth and we expect China’s production numbers later this week to show further evidence of a slowdown. This is being compounded by an aggressive and unpredictable flurry of regulations that are being created over several disparate industries to align the private sector with China’s social development objectives. Again, acting as a handbrake on economic growth and, at the same time, worrying investors.

Financial markets are also concerned. We have seen contagion spread to most EMs and a sense of risk-off has been created. This, in turn, is strengthening the US dollar and weakening EM currencies. When China sneezes, EMs catch a cold. It is therefore not surprising that the local currency and bonds have been under pressure. At this stage, we think that both the currency and bonds are still relatively close to their fair value and we see the actual contagion of our economy as being limited. Therefore, we are maintaining our view of the fair value of these assets.

The US Federal Reserve

The Fed concluded its meeting last week and, as was broadly expected, it used the opportunity to sensitise financial markets that a taper of bond buying is imminent. The Fed is currently buying US$120bn of bonds per month in markets. The pace of buying will slow down over time and towards the end of 2022, the Fed will likely cease buying bonds altogether. This was broadly expected and was of itself not a major surprise to markets. It does, however, give a strengthening undertone to the US dollar, which in turn looks like a weaker rand.

The market expects that the actual taper of bond purchases will be announced at the November FOMC meeting, with the first taper taking place in December of this year. This is a month ahead of Anchor’s original expectations but does not change our view with regard to the fair value of the rand or bonds. US bonds have been trading below our fair yields for a while, with the yield on the 10-year bond touching 1.10%, which was unsustainable. Bond yields have been creeping up and are currently at 1.54% for the 10-year bond. This is reasonable, in our view, although we do think that yields should be a little higher still and we are maintaining our yield target of 1.75% for this bond.

The US had its foot flat out on the accelerator when it comes to stimulus. Cheques in the mail, printing money, infrastructure spending and the like are all propelling US economic growth to record speeds. As the Fed takes its foot off the accelerator, the US economy will slow down. This deceleration is likely to be quite significant and it is entirely probable that the US growth rate will be below 2% in about 12 months. A decelerating US economy is likely to slow inflation and job creation and a strongly decelerating US economy is unlikely to see a massive spike in interest rates. Therefore, while rates are still headed upwards, we think that this will be contained, and we are holding our view that the US 10-year bond should target a yield of 1.75%. This creates a slight headwind for the rand and SA bonds, although this headwind will be relatively mild, in our view. The spread between SA and US bond yields increased through the COVID-19 crisis and we expect it to narrow again and to be in-line with its historic norms. Local bonds are fairly priced at the moment, if not slightly cheap following the recent sell-off.

The SARB’s MPC kept rates on hold last week, as was broadly expected. Inflation has risen a little in response to petrol and food prices, while the longer-term economic growth rate remains of concern. There is little doubt that the next rate move in SA will be a rate hike – the only question is when will this happen? Until now, it has been clear that rates would not be changed at the MPC meetings. However, from November, we think that these meetings are live in that a rate hike is a plausible outcome. We also believe that the most likely timing of the rate hike is towards the end of 1Q22, however, it cannot be ruled out that the hikes come earlier than we expect. The market is adjusting to the risk of SA rate hikes and our base case is that there will be three rate hikes between now and the end of 2022, which is far fewer than the 8 or 9 hikes the market is pricing in. Therefore, we still see significant opportunity in bonds following the recent sell-off.

The market is reacting to an eventful week and expressing concern about developments in China. Higher US yields are also creating a little noise, although we do not expect this to persist. Our fair range for the rand remains at R14.50-R15.00/US$1. In this context, the rand is just outside of our fair range. We expect that the current period of volatility will persist for a while yet and the rand might even weaken further before recovering into our fair range.

The currency continues to take direction from global developments and where the US Fed goes the rand is sure to follow. We continue to expect a little volatility as the tapering of bond purchases becomes a reality. However, once the dust settles and calm returns, we would anticipate that the local unit will be trading close to our fair value range of R14.50-R15.00/US$1. 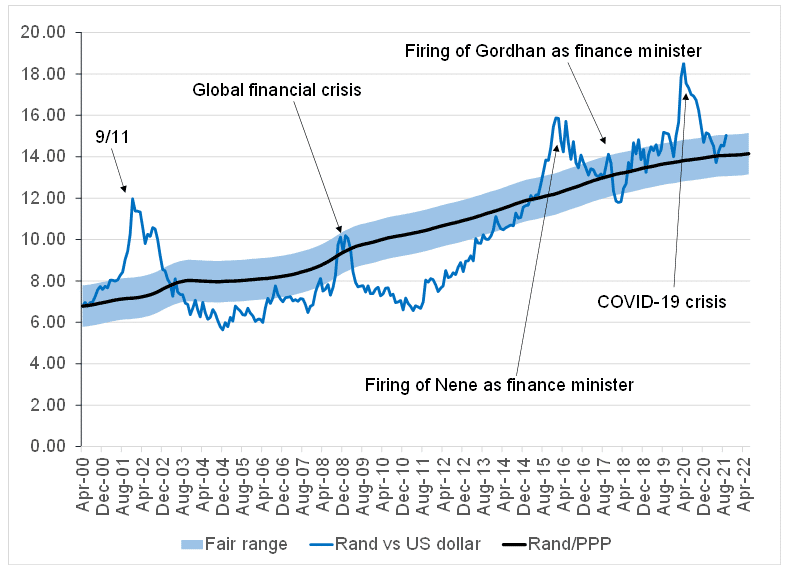