September was dominated by US yields rising from a low of 1.44% to c. 1.82%. This nearly 40-bpt rise in bond yields has had knock-on effects that have been felt across the globe. The reduced impetus for the carry trade has, in part, been to blame for domestic bonds weakening. We continue to hold that there is a risk aversion premium in current bond yields and that a fair yield is closer to 2%. In a scenario where everything goes right, we could see bonds sell off further. In the September Anchor Fixed Income monthly, we look at what has been driving yields, initially towards lows for the year, and what sparked the US sell-off in September.

US Treasury securities have moved dramatically in price over September. On 3 September 2019, the 10-year Treasury reached a 3-year low of 1.441%. As seen in Figure 1 below, the past month has also seen a dramatic weakening in the yield – from the low mentioned above to current trading levels of 1.829%.

In September’s Anchor Fixed Income monthly, we attempt to understand the drivers of: (1) the US 10-year rally to 3-year lows; (2) the subsequent weakening to current levels of ~1.8%; and (3) we plot a vision of how the US 10-year might evolve and the risks that will delineate that path. 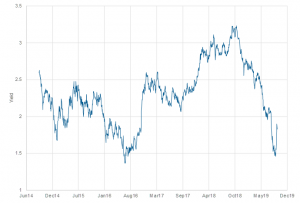 Why did US yields drop so low?

Below, we highlight the reasons why we believe US yields dropped to such low levels. These include: 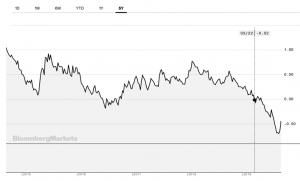 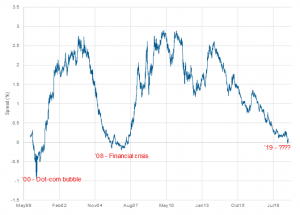 Why did US yields increase? 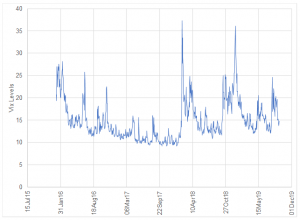 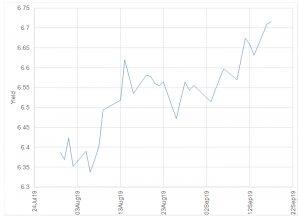 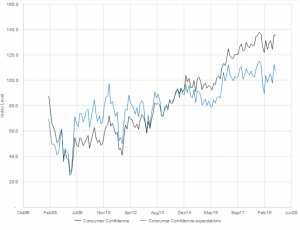 At the same time, as the dollar strengthened, EM counters weakened, making them more attractive buys on a relative basis. In Figure 7, we graph a comparison between the BR-US 10-year spread and the US 10-year (separate axes). This is reflected in the spread expanding as the dollar strengthened. The two lines inflect in early September, exactly as the US 10-year bottomed out and the spread recorded maximum expansion. Subsequently, the US 10-year has sold off, and the spread has contracted. We note that this spread is still well below levels reached earlier this year (a high of 7% was recorded in March 2019). 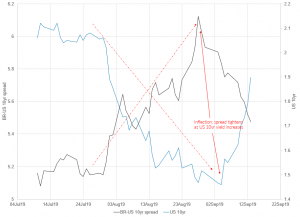 Fair yield on the US 10-year

Figure 8: US 10-year vs various regressions 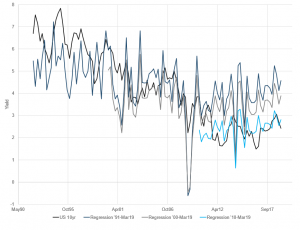 Looking to the future, upsides and risks 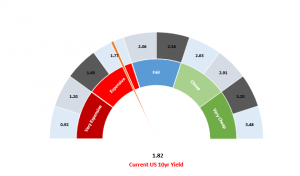