With a strong economic recovery underway, the tech sector has slightly lagged global markets in 1H21, with the performance gap between tech and the broader market getting smaller as we head towards the end of 1H21. However, this initial lag is not surprising to us, especially considering the strong economic recovery underway, which has encouraged investors to look elsewhere in more cyclical areas of the stock market that offer higher earnings growth at lower PE multiples. Sector rotation typically always happens when there is a new economic cycle – investors shift from growth companies into value companies to buy earnings growth on the cheap. COVID-19 has provided the depressed base off which cyclical companies may grow strongly. But, as the recovery slows, we believe that tech will eventually return to favour and the superior, long-term growth prospects of this sector will once again become clear. We note though that inflation could unsettle the tech sector – and other growth shares – if it remains high for an extended period.

In this report we take a deep dive into the tech sector to understand what happened in 1H21. 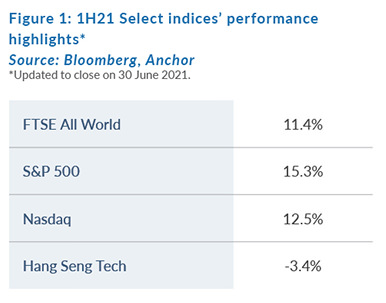 In 1H21, tech slightly lagged both the FTSE All World and the S&P 500 indices. US tech shares have, however, performed far better than Chinese tech counters, which is not surprising considering the heightened scrutiny that large Chinese companies are currently receiving from the Chinese authorities. 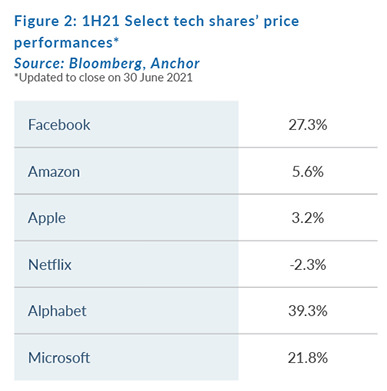 Among the large US companies (i.e., the FAANGMs – Facebook, Amazon, Apple, Netflix, Google/Alphabet, and Microsoft), the online advertising giants (Alphabet followed by Facebook) have been the star performers, while Netflix and Apple have been the laggards in 1H21. The recovery in advertising (especially online) since 3Q20 has surprised us all but it is entirely consistent with an economic recovery. Netflix has some indigestion after strong subscriber growth during the height of the COVID-19 pandemic and it is also no longer the only game in town in terms of streaming services. The Walt Disney Co. (Disney) is making great strides in this increasingly three-player streaming market (Netflix, Disney, and Amazon). Apple performed very strongly last year, as appears to be the typical pattern leading up to the launch of a major new product cycle (5G phones were launched in late 2020). To complete the picture, Microsoft continues to perform steadily as its unstoppable cloud business now accounts for over 40% of the company’s total revenue, while Amazon, much like Netflix, possibly has a period of slower growth ahead in 2H21, following the brisk 38% YoY revenue growth recorded in FY20.

If we delve deeper into the various tech sub-sectors, social media, and search together with semiconductors have led the way in 1H21. Snapchat, Facebook, and Alphabet have performed well because of solid upward revisions to their respective earnings as the advertising upcycle gained momentum. The chart by Morgan Stanley in Figure 3 below, shows by just how much its US online advertising forecasts have increased for 2021. After a strong 1Q21, we expect another cracking quarter from Alphabet and Facebook in 2Q21 before growth begins to normalise somewhat. Global online advertising continues to gain market share despite approaching 60% of total global advertising spend. It appears that TV advertising will face more and more pressure from online – US TV advertising has been stuck at the c. US$65bn-US$70bn p.a. level for several years. 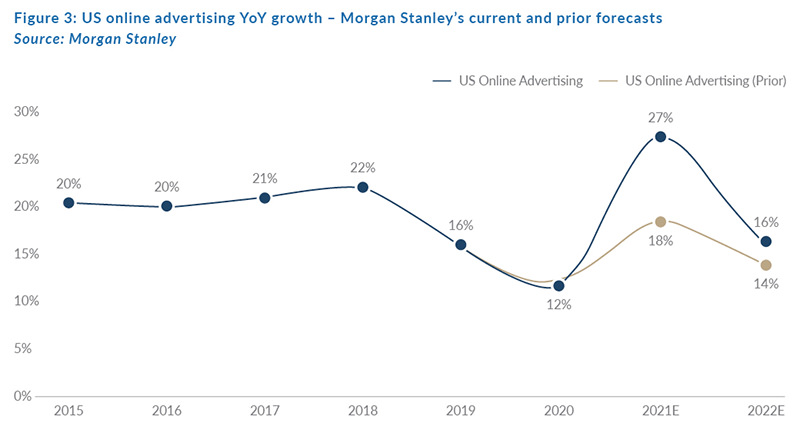 The semiconductor sector also had a strong 1H21. As we have seen in many industries in 2021, the recovery of the global economy has resulted in a mad scramble for commodities and imported goods as businesses try to meet the surging demand from their customers. Semiconductor manufacturing (i.e., chips), a heavily concentrated industry where Asian companies dominate (e.g., Taiwan Semiconductor Manufacturing Company [TSMC] and Samsung in South Korea), is in the eye of the storm. The current chip shortage is expected to last into 2022, affecting car production, as well as a range of other manufacturing industries that are heavy consumers of logic and memory chips. Memory prices (e.g., DRAM) have accordingly surged this year – and the major producers are increasing their capex plans to meet, what is expected to be, a higher level of demand going forward. The shares prices of many of the major players in the industry, including semi-equipment companies like ASML Holdings, have performed extremely well in 2021. 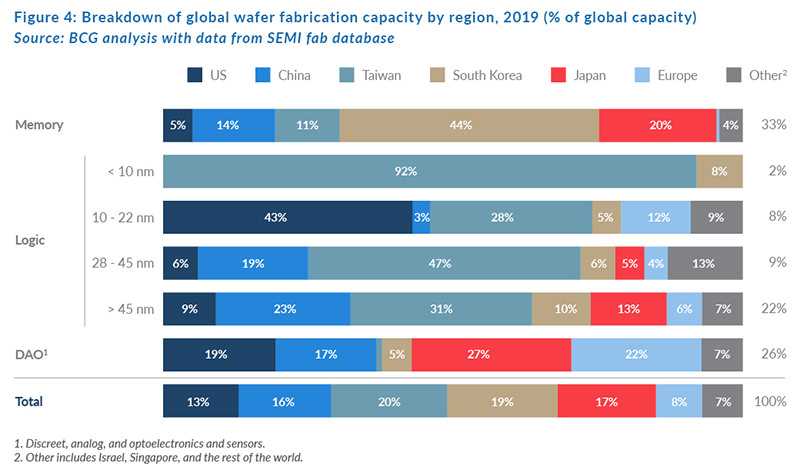 Not only has regulatory oversight of the Chinese internet market been switched to maximum since Jack Ma’s infamous speech on 24 October 2020 (pre the aborted Ant Group listing), but the competitive situation has also moved up a notch or two. This has shaken local giant, Alibaba, the leading e-commerce, and cloud company in China. 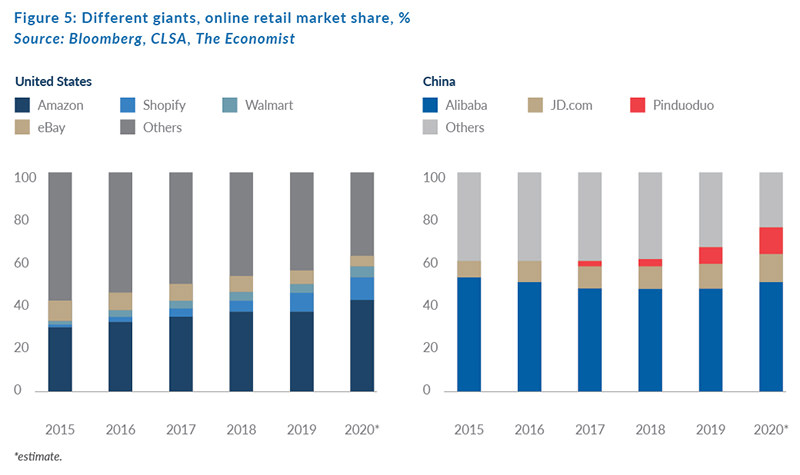 Alibaba and JD.com have long dominated the Chinese e-commerce market and the competition between these companies has been fierce, albeit somewhat predictable. In recent years however, a new entrant called Pinduoduo has disrupted the market by introducing a form of value-based shopping combined with light entertainment (an online blend of Costco and Disney) – and this has become known as social e-commerce. Pinduoduo’s mobile-only app has rapidly gained traction and, astonishingly, it now has the same number of active users as Alibaba. The new retail format has spawned copycats from the old guard. 2021 will witness an almighty fightback from Alibaba, and if you consider the plans for all the major internet companies (including Tencent, Meituan Dianping, and the EV players), we are in for a heavy investment phase in the Chinese internet industry. Profits will be slightly depressed for the next while.

Food delivery companies have also had a tough 1H21. The land-grab phase in food delivery apps appeared to be closer to the end than the beginning, but now that they are expanding into adjacent areas such as grocery delivery, they are having to deal with competitors from those areas too. For now, investors appear to be uncertain how attractive this business model will eventually be. It may be too early to comment.

The earnings outlook for the US tech sector looks promising, with consistent earnings upgrades during 1H21. The Nasdaq Composite is expected to grow earnings at a compound annual growth rate (CAGR) of 40% over the next 3 years! However, Chinese tech has seen consistent downgrades to earnings – for the reasons given above. The Hang Seng Tech Index is expecting earnings growth of only 13% over the next 3 years (on a CAGR basis). 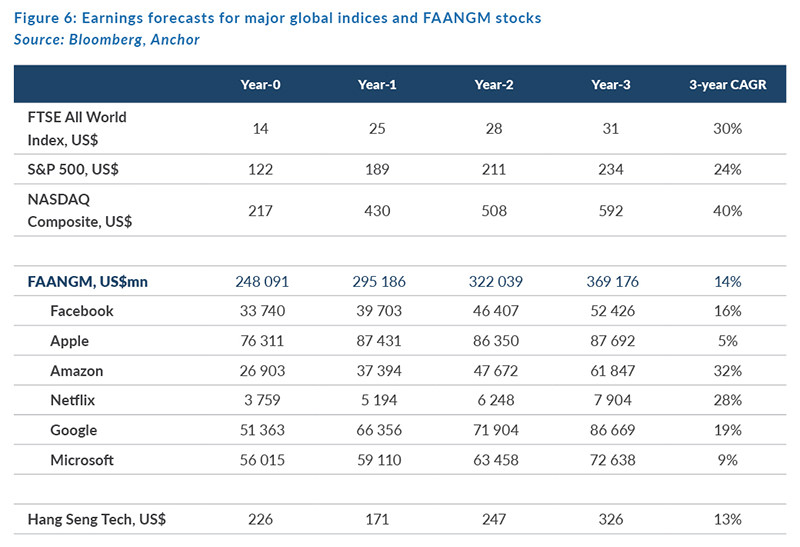 The forecasts in Figure 6 above can be compared with a CAGR over the next three years of 30% and 24% for the FTSE All World Index and the S&P 500 Index, respectively.

Sentiment is clearly more negative in Chinese tech, and in shares like Naspers, and Softbank, while investors are generally bidding up for Alphabet, Facebook, Microsoft, Adobe, Nvidia, the gene-editing companies, and Illumina.

The Chinese tech sector scores very well on P/E multiples and potential upside to our discounted cash flow (DCF) valuations. But there is heightened competition in this market, and we do not know how long it will last. Interestingly, many of the Chinese e-commerce upstarts are backed by Tencent, which is Alibaba’s archrival in China, while Tencent’s own operations are likely to be the least impacted by the tougher environment even though it is also committing to higher spending (on businesses services, gaming, and short-form video content). Our conclusion in this regard is that some interesting investment opportunities may soon emerge in the Chinese internet sector.

In the semiconductor segment, Intel is undergoing a transformation under the leadership of Pat Gelsinger, the new CEO. Having fallen behind TSMC in the production of the highest end nodes (i.e., <10nm transistors), Gelsinger needs to restore Intel’s manufacturing prowess so that it becomes a market leader once again. It is probably too early to judge whether he will succeed or not, but clearly if he does Intel offers significant upside for investors.

Delivery Hero is another interesting prospect. We believe that this high-growth, food delivery company under the excellent leadership of Niklas Östberg is establishing dominance in several large markets and, although the market is still evolving rapidly, the company appears to be making the right moves.

Barring a prolonged period of high inflation (i.e., not transitory), we would expect the tech sector to perform well over the long term, relative to the broader stock market. This is purely a function of superior earnings prospects for the sector – partly driven by the digital transformation of the global economy. Over the shorter term however, we have a slightly different take. Our theme for tech investing in 2021 is ‘adjusting for risk’. And this is what we feel investors need to do while global liquidity remains high and market sentiment is strong – avoid taking undue risks.

The Anchor Capital BCI Global Technology Fund is worthy of your consideration. Managed by a dedicated investment team headed up by David Gibb, the fund returned 32.1% p.a. in its first two years to the end of June 2021, as compared to the S&P 500’s return at 22.9% and the MSCI World’s 20.1% return over the same period. If you would like to find out more about the fund, please contact your financial advisor or email [email protected].