African markets and the importance of a credible regulatory environment

The advent of the COVID-19 pandemic has resulted in Africa heading for its first recession in more than 25 years. However, we believe that there are reasons to be optimistic about the continent’s growth prospects. The near-term outlook points to an increased resilience of African economies, with output forecast to expand by above average trend growth rates in 2021. Fiscal and monetary stimulus programmes are also supporting African debt markets, helping to prevent bankruptcies, and spurring global demand and trade. The countercyclical liquidity support of multilateral development banks (MDBs) is helping African countries adjust to the virus-induced macroeconomic fallout and to deal with pressures on liquidity.

Nonetheless, there is a consensus that Africa’s growth momentum remains fragile, and that the ‘Africa rising’ narrative is now far more nuanced than before, with different regions and countries facing divergent economic prospects. It is therefore more important than ever that structural gaps are fully addressed in African financial markets to deal with investment hurdles and to continue to attract local and global capital. Developing financial markets’ infrastructure and attracting private capital from Africa and beyond are key elements in Africa’s overall economic and social development. This can offer additional growth and funding opportunities to local firms, providing them with access to long-term financing and helping to overcome some of the challenges of low lending rates and high costs across the continent.

Financial market development also offers opportunities for international and domestic investors to access fast-growing African countries. In the context of low returns on assets in more traditional markets, this is an increasingly relevant consideration. Investors globally have sought higher returns than those offered in low-yielding developed markets (DMs) by expanding into new locations and accessing a growing range of assets. African financial markets stand to benefit from this trend, but long-term success depends on African countries improving legal and regulatory certainty and boosting market transparency. A healthy market is key to attracting capital.

This past year, Morocco especially made great strides in this regard. The World Bank has highlighted Morocco’s progress in strengthening minority investor protection through “expanding shareholders’ role in major transactions, promoting independent directors, increasing transparency on directors’ employment in other companies, and making it easier to request general meetings.”

Kenya too has made considerable progress, with its Capital Markets Authority notably issuing guidance and allowing listed firms to purchase their own shares. These share buybacks, which can assist in encouraging stock market activity, boosts the country’s score in this indicator.

However, Morocco and Mauritius offer the most attractive tax environments overall. Both have low levels of withholding taxes and a high number of double taxation treaties with other countries. Mauritius generally has no withholding tax on dividends, but some are specified in tax treaties.

Over the past few years, Ghana’s tax system has been transformed to becoming broadly supportive of capital market development and the country’s regulators are using tax breaks to develop new market segments. From 2020, fees charged by a local fund manager for the management of a licensed private equity fund, venture capital fund, or mutual fund are exempt from value-added tax and the country’s health and education levies. Private equity is increasingly being viewed as a means to provide capital to smaller firms and create a pipeline of companies that can list on stock exchanges.

Elsewhere, Angola’s capital market development initiatives are beginning to gain positive traction in the form of a friendlier and simpler tax system. Along with the Ivory Coast, Angola has tax discounts on income from longer-term government bonds, which could help bond market activity and foster the formation of a yield curve against which other assets can be priced. Angola’s first tax treaty (signed with Portugal), came into effect in late 2019. 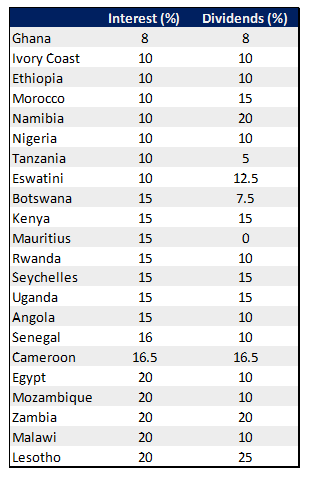 On regulatory and reporting issues, most African markets have traditionally been far less developed than the major financial centres of Europe, Asia, and North America. This, in part, reflects the fast-changing nature of global financial regulations and reporting standards following the global financial crisis (GFC). In recent years there has been a wide adoption of International Financial Reporting Standards (IFRS) across the continent, with most requiring listed firms to report according to IFRS. However, COVID-19 is making it challenging for African countries to meet these financial reporting requirements. IFRS 9, which came into effect in 2018, requires banks to estimate expected credit losses, based on historic, current, and forecast economic conditions. The uncertain environment makes this more difficult and may exacerbate problems in fulfilling capital adequacy requirements.

In order to create investable assets, it is necessary to have an independent assessment of a company’s financial prospects (i.e. through external credit ratings) and the establishment of benchmarks for pricing financial assets. This is important for attracting institutional investors, as many are required to invest exclusively in benchmark-eligible securities. Across the African continent, it is not surprising that South Africa (SA) ranks highest in terms of the availability of external credit ratings. SA’s sovereign debt is rated by all three major international rating agencies (Standard & Poor’s, Moody’s, and Fitch) and it has the highest number of corporate ratings.

However, in Africa, except for a handful of countries, corporate ratings from international ratings agencies are scarce – SA, Nigeria, and Mauritius have 93, 38, and 31 but all other index countries are in the single figures (see Figure 2). For some countries, the number of ratings has grown slightly. Interestingly, the leading international ratings agencies typically do not have a local presence within the African continent, which has created opportunities for African agencies such as Johannesburg-based, GCR Ratings. Most of GCR’s ratings are for SA corporates, but it has rated firms in Kenya, Tanzania, Ghana, Botswana, and Uganda. Other African ratings agencies include Datapro and Agusto & Co, which are both focused mostly on Nigerian firms.

Figure 2: The number of African corporates by country rated by ratings agencies 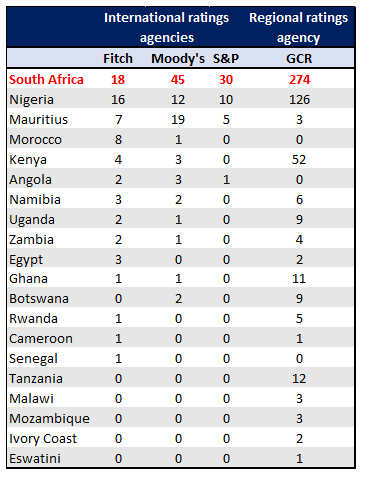 Overall, the development of capital markets is a function of underlying investment and capital deployment activity which, in turn, looks towards regulatory certainty. Thus, the absence of regulatory certainty can be highly damaging in any financial marketplace. Furthermore, regulators must be flexible in dealing with an ever-changing financial landscape – incentives should be made available for the creation of new financial products and the development of existing instruments. Regulatory coordination and harmonisation are important in reducing the costs of compliance and accelerating market development. This is an important consideration not just for attracting foreign investors but also for boosting the participation of local investors, including pension funds and insurance companies. It is also a primary concern for many securities exchanges seeking to increase market activity and raise liquidity. The development of domestic assets that are attractive to local investors, and the creation of a regulatory environment that helps increase local investor capacity, are fundamental to boosting African financial markets.