After the stellar end to 2019, most major global markets closed the month lower after the two weeks to end January recorded some of the most volatile market action in months and Friday (31 January) saw a major sell-off on Wall Street. For the first time in a while it wasn’t trade war worries that weighed on equity markets but rather negative sentiment being driven by fears of the new coronavirus (or Wuhan Flu) originating in China. Even the early-January drone strike ordered by US President Donald Trump, which killed prominent Iranian commander Qasem Suleimani and which was seen as bringing the US close to war seemed but a distant memory. On Thursday (30 January), the World Health Organization (WHO) declared the Wuhan Flu a public health emergency – the virus has thus far (to 3 February) spread to 17,405 people in China alone, killing 362. Cases have also been confirmed in several other countries including Australia, France, Japan, Singapore, South Korea, Thailand, the US and Canada, with a total of 175 infections globally (excl. Mainland China). Fears around the virus saw the Volatility Index (VIX), which represents the market’s expectation of 30-day forward-looking volatility, last week jumping to its highest level since early October 2019.

After topping the 9,000 mark for the first time on 26 December, the Nasdaq ended January 2.0% higher despite a few hiccups along the way. The Nasdaq was driven by an impressive performance from Amazon (+8.7% MoM) following its better-than-expected results. The S&P 500 (-0.2% MoM) and the Dow Jones (-1.0% MoM) reached all-time highs during the month, but still closed lower MoM. Both indices recorded their largest one-day declines since August 2019 on Friday (31 January) as fears that the Wuhan Flu would slow global economic growth intensified.

On the US economic data front, 4Q19 GDP growth came in at 2.1% – in line with forecasts, while overall growth in 2019 was 2.3%. December consumer spending rose modestly (+0.3% YoY), ending a satisfactory US holiday shopping season. The inflation rate also picked up as core personal consumption expenditure (PCE), a separate measure of inflation stripping out food and energy, rose 0.2% YoY in December, while the yearly rate edged up to 1.6% vs 1.5% in 2018 (we note this remains below the US Federal Reserve’s [Fed] 2% target).

Major European markets also closed in the red, with the region’s largest economy, Germany’s DAX down 2.0% MoM, while France’s CAC dropped 2.9% MoM. According to the first official estimate of eurozone economic growth, the economy of the 19 European Union (EU) countries only grew 0.1% in 4Q19. However, the number of unemployed people fell to 7.4% – the lowest level since May 2008, according to Reuters. Following c. 4 years of uncertainty (and 40 years of being part of the bloc), the UK finally left the EU on 31 January entering an 11-month period of transition during which it will need to negotiate new trade agreements with its biggest partners in the region. The UK’s FTSE 100 was down 3.4% in January.

In Asia, Chinese markets have been closed since 23 January for the Lunar New Year holiday, which the government extended until Monday (3 February), while authorities attempt to deal with the Wuhan Flu outbreak. For the period during which these markets traded in January the Hang Seng dropped 6.7%, while Hong Kong’s Shanghai Composite Index closed 2.4% lower MoM. China’s official manufacturing purchasing managers’ index (PMI) came in at 50.0 for January – in line with expectations (a reading above 50 indicates expansion, while below 50 signals contraction). We highlight that the coronavirus outbreak was not fully reflected in this reading, since the survey is conducted prior to 20 January. While shares on the Japanese market closed higher on Friday, MoM the Nikkei was lost 1.9%.

On the commodity front, crude oil prices dropped around 15% last month (the biggest January decline in c. 30 years according to oilprice.com) as global travel restrictions rose due to the new coronavirus, denting fuel demand. After posting good gains in December, the gold price continued its upward trajectory rising 4.7% MoM. Benchmark iron ore prices lost c. 8% in January as the Wuhan Flu outbreak cast a bearish outlook over iron ore. The price of platinum was down c. 1.0% MoM, while palladium (which together with platinum, rhodium and three other metals forms part of the platinum group metals [PGM] basket) continued to increase. Palladium jumped c. 20% MoM, driven by a persistent supply deficit in the palladium market and high demand for the metal due to stricter Chinese emission standards (requiring more palladium per vehicle). The rand came under pressure in January dropping 7.3% MoM against the dollar.

Locally, 2020 started on a disappointing note, as load shedding resumed earlier in the month than expected. Former Nampak CEO Andre de Ruyter joined Eskom’s as its new CEO in January. In addition, the World Bank revised SA’s 2020 GDP growth forecast lower (to 0.9% vs 1% previously) and forecast GDP growth averaging 1.4% in 2021-22 if President Cyril Ramaphosa’s administration implements the necessary structural reforms and addresses current policy uncertainty. Meanwhile, at the World Economic Forum (WEF) in Davos, the SA contingent was decidedly smaller than in previous years although Finance Minister Tito Mboweni, speaking at a press conference, said the SA delegation had “many fruitful conversations” with potential investors. 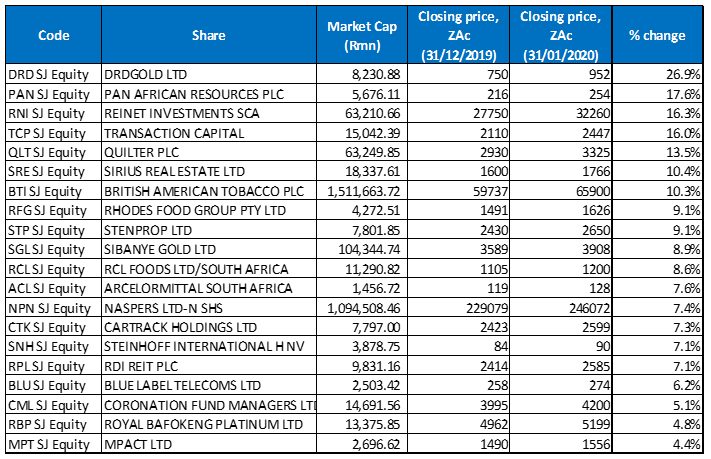 DRDGold was January’s best-performing share, jumping 26.9% MoM as the gold retreatment firm released a trading statement saying that it expected a 69.0% YoY surge in revenue during its half-year to end-December. DRDGold expects to report earnings per share (EPS) of between ZAc47.78 and ZAc49.22 for the half-year vs a loss of ZAc7.2/share for the previous corresponding period. In early January, Sibanye-Stillwater also announced that it has acquired a majority shareholding in DRDGold, in a deal the company described as creating an industry-leading surface mining partnership. Sibanye increased its shareholding in DRDGold from 38.05% to 50.1%. Shares were acquired for R6.46/share (R1.09bn total) in cash.

In second place, Pan African Resources recorded a 17.6% MoM share price rise. The gold miner said last month that it expects profits to more than double in the six months to end-December on the back of a rising gold price and higher production. Pan African also forecast headline EPS to rise by between 122% and 132% YoY from the previous period’s USc0.5. The miner reported that gold sales rose 91.6% YoY to 29,301oz at its Elikhulu tailings retreatment plant.

In third spot, Reinet Investments’ share price closed 16.3% higher MoM. Last week, Reinet reported a 14% YoY increase in its net asset value (NAV) per share in the three months to end December, buoyed by its investment in BAT, which was up 10.3% MoM. Reinet’s stake in BAT (of 65.4mn shares) is its biggest investment, representing 48.6% of its NAV.

Transaction Capital, Quilter Plc and Sirius Real Estate recorded gains of 16.0%, 13.5% and 10.4% MoM, respectively. Investment and wealth management services provider, Quilter’s share price rallied more than 8% on Wednesday (29 January) after it posted a strong performance last year. Assets under management and administration (AuMA) increased 13% YoY to GBP110.4bn at the end of December, with growth being supported by positive market movements. Gross sales rose to GBP3.5bn, compared with GBP3.0bn in the same period of 2018. Sirius, an operator of branded business parks, said in January that it had completed the acquisitions of Neuss II, a business park near Düsseldorf, and Neuruppin Business Park, in the Brandenburg region, for a combined total of EUR33.40mn. Sirius’ current portfolio also continues to perform well.

Earlier this month, BAT’s (+10.3% MoM) share price rose after it said that the US had eased back on its crackdown on flavoured vaping products. The tobacco manufacturer also flagged good growth for the year to end-December.

Both Rhodes Food Group and Stenprop Ltd were up 9.1% MoM. In January, Rhodes reported a strong turnaround in its FY19 performance as its operating profit increased 25% YoY and headline earnings rose 38% YoY. The Group also grew total sales by 8.5% YoY to R5.4bn with CEO Bruce Henderson saying that the results benefited “from robust regional sales, the early signs of recovery in the international business and expanding margins.”

Finally, Sibanye Gold’s (+8.9% MoM) share price has been buoyed by the ongoing rally in the PGM basket and an increase in the gold price. In November 2019, its share price rose sharply after it reported a 240% YoY increase in earnings before interest tax, depreciation and amortisation (ebitda) to R5.5bn in the quarter to end-September 2019. Sibanye’s SA-based PGM operations contributed R2.9bn to ebitda, its US PGM operations R1.8bn and its local gold operations R843mn, the firm said. 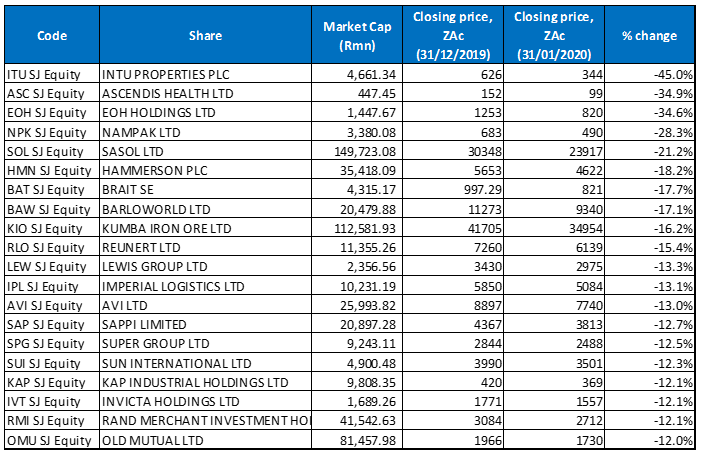 UK-based mall owner, Intu’s share price remained under pressure in January losing a further 45.0% after plunging 70.4% in 2019. Last month, Intu confirmed in a market update that it plans a capital raise at the end of February to coincide with the release of its FY19 results. The proposed capital raise comes as Intu looks to “fix the balance sheet,”, which has been weighed down by a debt burden reportedly standing at c. GBP5bn. Intu owns 17 of the largest shopping centres in the UK as well as a few Spanish malls. The firm said last month that it had already raised R2.3bn from the sale of a Spanish shopping centre.

Ascendis Health was the second-worst performing share – down 34.9% MoM, followed by EOH Holdings in third spot. EOH (-34.6% MoM) last week closed at its lowest level since September 2009, despite the firm saying that its cost-saving efforts were starting to bear fruit. According to EOH it had managed to keep afloat and had also reconfigured its corporate structure since the suspicious transactions scandal in 2019. EOH now has three key pillars – iOCO, NEXTEC and IP, but in future the company noted that it “would look to flatten the structure and integrate into a single business unit.”

Packaging manufacturer, Nampak, Sasol and Hammerson Plc recorded MoM losses of 28.3%, 21.2% and 18.2%. In January, former Bevcan executive, Erik Smuts assumed the role of CEO at Nampak, after its previous CEO left to join Eskom. Meanwhile, Sasol’s share price plunged after it announced lower expected margins and operating profit in a trading update. Sasol said its HEPS are expected to be between R4.79 and R7.11 for the financial half year ended 31 December – a YoY drop of between 69% and 79% from the prior half’s HEPS of R23.25. It attributed this to a 9% decrease in the rand price per barrel of Brent crude oil, the weaker global chemical and refining margins, and ongoing difficulties at its Lake Charles Chemicals Project in the US. Earnings were further depressed by c. R1.7bn in additional depreciation charges and R2bn in finance charges as the Lake Charles units started to become operational.

Brait SE (-17.7% MoM) last month unveiled a deeply discounted R5.25bn share sale, as part of a sweeping overhaul of the investment holding company which has been grappling with weak demand and high borrowings. The organisational shake-up also involves the sale of assets such as Virgin Active and the introduction of a new strategic investor, Ethos Private Equity. As part of the plan, Brait said it will sell 795mn new shares at R6.60/share, and the money will be used to repay its remaining GBP170mn (R3.2bn) worth of bonds due in September, and to also partially repay Brait Mauritius’s existing, revolving credit facility.