Luxury goods firm, Richemont released its 1Q23 (for the quarter to 30 June 2022) trading update on 15 July. The company reported higher sales in the US and Europe which offset the 37% YoY drop in revenue for mainland China. Total 1Q23 sales came in at EUR5.26bn – 12% YoY growth in constant currency terms. Europe reported much stronger-than-expected results, despite the lack of Chinese tourists, while revenue for the Americas region, of which the US accounts for 87%, was also much stronger than expected, indicating that the high-end US consumer is still spending. This was despite the fact that US consumer confidence was down c. 14% YoY for the reported quarter, and even though US tourists were reportedly partially responsible for the bump in Richemont’s European sales. China was much weaker than expected and, even in June, once lockdown restrictions under that country’s zero-COVID policy had been removed, sales were still 12% weaker YoY, so there were no signs of 2 months’ worth of pent-up spending being unleashed.

We highlight the following points from the Group’s trading update:

In terms of Richemont’s business segments, we note the following:

Figure 1: Richemont sales by region and segment, actual vs estimates

In our view, the positives from this trading update included the following:

We highlight the following points as negative in this trading update:

The share price has underperformed global markets YTD (-32% in US dollar terms vs -21% for MSCI World) and the share is now on a more reasonable rating – c. 20% below its average rating in the 2-3 years leading up to the pandemic. (see Figure 2). 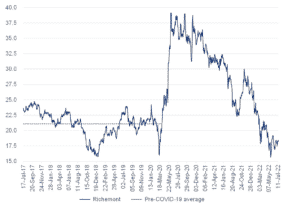 However, on a relative basis, its premium to the MSCI World is only c. 5% below where it was pre-COVID. 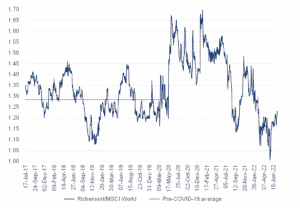 There have not been any meaningful consensus analyst earnings downgrades for Richemont lately, which makes sense given its consistent positive top-line surprises. 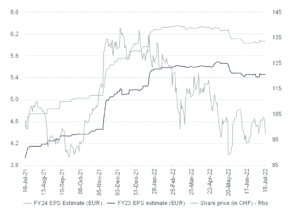 There are still no signs that high-end consumers are slowing down their luxury spend, but this has historically been a highly cyclical sector and it is probably unrealistic to assume that sales will not suffer in the event of a global economic slowdown. That said, there are still some latent tailwinds from an incremental improvement in tourism spending and a return of the Chinese consumer post-lockdowns. The lack of progress on the YNAP spin-off is frustrating and likely increases the chances that the terms of the spin-off, when eventually announced, will be disappointing.

On a long-term basis this is still a high-quality company with great brands and solid execution, but in the short- to medium-term, it remains susceptible to any economic slowdown and, although on an absolute basis it looks fairly cheap, on a relative basis, it is only moderately cheaper than global equities (c. 5% lower premium to the MSCI World vs its pre-pandemic average).