On 22 May 2019, Sasol gave investors an update on its Lake Charles Chemicals Project (LCCP) in the US. The firm (once again) revised its capital expenditure (capex) estimate for the troubled project higher – this time by c. $1bn, increasing the estimated cost range from $11.6bn–$11.8 bn to $12.7bn–$12.9 bn. Market reaction was swift, penalising Sasol’s share price by 13% on the day of the announcement (22 May) and by an additional 5.7% the following day (23 May). The $1bn capex increase is significant, representing c. 6% of the company’s market cap of $16bn prior to the announcement. The LCCP will now cost c. 50% more than the original amount provided when Sasol first unveiled the project in 2014. 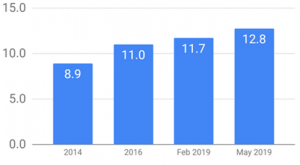 * Midpoint of ranges given for February and May 2019

According to Bloomberg, once completed, the LCCP was expected to boost the chemicals portion in Sasol’s sales mix to c. 70%. It was originally one of two mammoth plants planned in the US (the second [a gas-to-liquids project] was abandoned during the oil-price crash, while the LCCP was approved).

Sasol also reduced its guidance for LCCP’s FY22 earnings before interest, tax, depreciation and amortisation (EBITDA) by 23% YoY from $1.3bn to $1.0bn. Following this latest capex increase and the reduction in EBITDA, the project’s forecast internal rate of return (IRR) is 6.0%–6.5% in US dollar terms, which means it is struggling to cover its cost of capital.

We estimate that LCCP’s FY22 earnings contribution has declined from c. R18/share to R12/share since FY14.

The results of Sasol’s portfolio review, which has been underway for some time, was also announced on the day. Sasol said it expected to complete $2bn in asset sales of non-core operations, although details around the proposed sales were sparse. The only assets outlined for sale currently are its Malaysian assets (already sold for $193m) and Sasol’s Canadian shale gas assets, which could fetch $500mn.

Following the latest cost increase in LCCP, the second in three months, investor fatigue around the share is particularly high, as reflected in Sasol’s current forward P/E multiple of 7.5x vs its five-year average of 10.3x (see Figure 3). 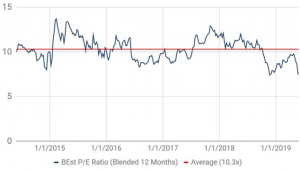 We estimate that Sasol’s existing business would earn R41/share at a R14.40/$1 exchange rate and an oil price of $60/bbl. This, in addition to a very conservative R72 valuation for the LCCP, suggests limited downside at current levels unless energy and chemicals prices decline significantly in the short- to medium-term. 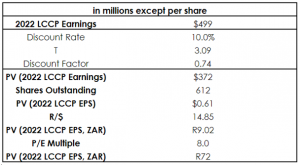