Update on the Naspers/Prosus discount to NAV

It has been a while since we looked at the Naspers and Prosus discounts to net asset value (NAV) and some time has also passed since the Prosus-for-Naspers share exchange took place, thus allowing us a bit of a historic track record of these discounts since the deal was done. As it happens, 11 September also marked exactly two years since Prosus listed on the Euronext Amsterdam with an inward listing on the JSE, so this note is also quite timeous from that perspective. Certainly, the extreme volatility in both companies’ respective share prices since all this regulatory noise in China started, creates the perception that their discounts have been relatively volatile.

First, looking at the Naspers discount to NAV in Figure 1 below, we show the key points to keep in mind when studying the discount trend (the date on which Prosus was listed and the recent share exchange). Prior to the Prosus listing, Naspers traded at a discount to NAV of 35%-40%. Going back further historically, it was closer to 25%, but we think that becomes increasingly irrelevant the further back you go. It looks to us like it took a couple of months for the market to decide what the right discount range was going to be. However, since December 2019, it has averaged just below 50%. As we feared might happen, since the share exchange has taken place, the discount (so far anyway!) has just stepped up to a new level. Currently, we make it about 56.5%, and it has averaged 55.7% since mid-August when the exchange became effective. 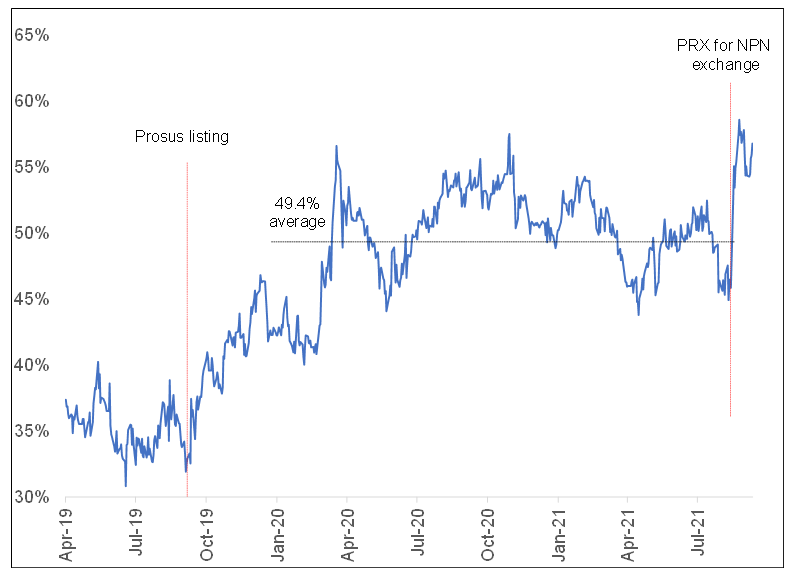 Turning to Prosus, for which the discount to NAV since its listing is shown in Figure 2 below, it also took a few months for the market to decide what the fair discount range was going to be. However, since December 2019 it has traded at an average discount to NAV of just below 34%. Notably, this is not far from where Naspers traded prior to Prosus being listed. The conclusion to be drawn here is that the introduction of Prosus between Naspers and the underlying investments did indeed create a “double discount”, much as investors feared when the plan was announced. Certainly, with the passage of time, any value that was unlocked, quickly disappeared. Since the share exchange in August 2021, it also appears that the discount at a Prosus level has stepped up to a higher position. Currently, at about 41%, it has averaged 39.5% since the share exchange. 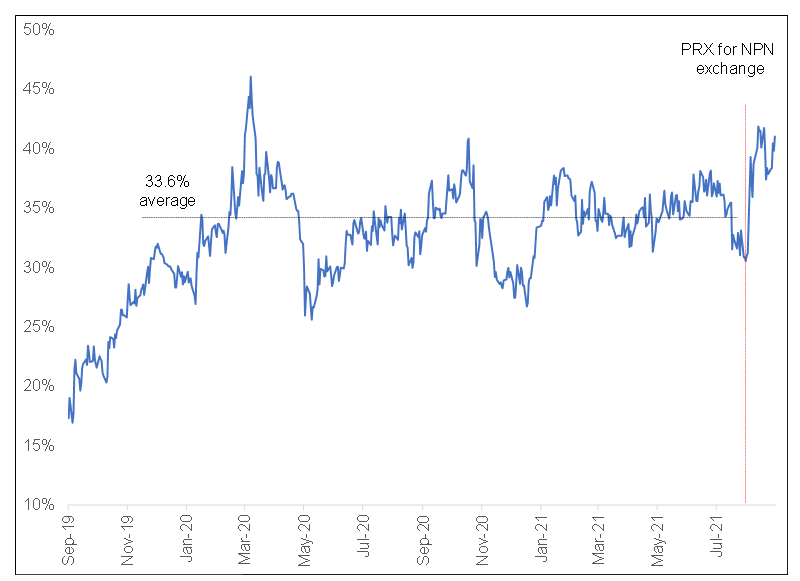 Finally, when studying the price relative performance between Naspers and Prosus in Figure 3 below, we note that when the line is moving up, it means that Naspers is outperforming Prosus and when the line is moving down, Prosus is outperforming Naspers. As many investors will be aware, Naspers dramatically underperformed Prosus in the days following the share exchange. Interestingly though this has partially reversed a long period of outperformance from Naspers that began in September 2020.

Although it will have felt pretty painful for those Naspers shareholders who opted to hold onto their Naspers shares, it did not take Naspers to the sort of extreme, from a relative performance point of view, that many may have assumed. Figure 3 is also interesting in that it gives you a sense of how generous the exchange ratio offer was (of 2.27 Prosus shares for every 1 Naspers share) – this is certainly at the high-end of the exchange ratio over time. 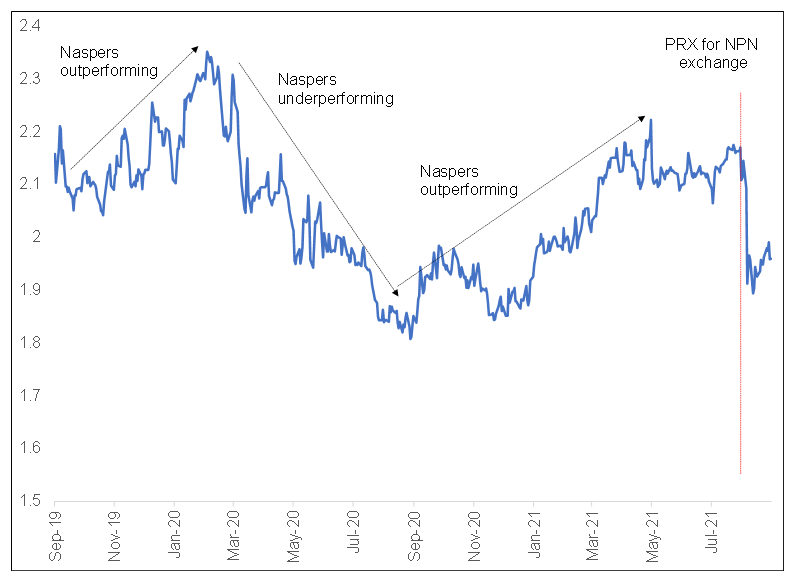 As for the current relative preference between these two shares, we believe that the point to draw from the above is that the discounts on both counters are pretty wide, relative to their own histories. There has also been a widely held view that Prosus is the preferred of the two after the share exchange, largely because there is a US$5bn Prosus share buyback programme currently taking place and Prosus is likely to benefit from an increased weighting in the various indices in which it is a constituent. On the other hand, it is not obvious what corporate action might happen in the foreseeable future that would benefit Naspers shareholders specifically and thus the view is that Naspers is likely to be dragged around by whatever happens to Prosus.

We highlight though that it is interesting that, following the initial sharp underperformance of Naspers post the share exchange, the Naspers share price has actually been outperforming Prosus slightly. We do not have a strong preference either way at the moment. More importantly, right now we need China to stop lobbing grenades at their tech companies on a weekly basis, whereupon a moderation in the level of negative sentiment surrounding China should allow Tencent to recover, even if, as seems likely, the equity risk premium will remain elevated for the foreseeable future.

Key decisions to get going with offshore investment

The mechanics of getting money offshore