South Africa’s infrastructure drive: Are we turning a corner?

SA has in the past been good at producing various ambitious plans to support economic growth which, unfortunately, never  come  to  fruition.  Since  the  dawn of our democracy, we have seen many of these economic plans being set out, updated, and, ultimately, replaced. From the Reconstruction and Development Programme (RDP) in 1994, to the Growth, Employment and Redistribution (GEAR) strategy in 1996, to the Accelerated and Shared Growth Initiative of  South Africa (AsgiSA) in 2006, to the New  Growth  Path  (NGP) in 2010, and the National Development Plan (NDP) in 2012, we have had many iterations of new growth strategies for our fledgling economy. All of these plans had their respective critics, with the balancing act of righting the wrongs of the past through social spending, while also driving economic growth through capitalist theory always being a difficult task. Still, in general,  these plans were embraced and, in theory, they would   all have likely helped to grow the country’s economy. Unfortunately, most of these  plans  never  achieved  their ultimate goal. Mismanagement, bureaucratic red tape, an inability to measure their progress and a lack of real urgency from government, combined with ever- changing global economic conditions resulted in these plans stumbling at the initial critical hurdle of actually being implemented.

In light of the above, it  is  therefore  understandable  that the new growth plan, the Economic Reconstruction and Recovery Plan, announced by President Cyril Ramaphosa in October 2020 was met with skepticism and even cynicism. Much of this “new” plan consisted of rehashed projects and goals from previous plans and many commentators, including yours truly, said that there was actually nothing new about this “new” plan.

But then a few weeks after the plan’s announcement,  we came across an opinion piece entitled View from up Close: Why this Plan is Different, dated 16 October 2020 and published on the Daily Maverick website. The article was written by Saul Musker, who works for the Project Management Office in the Presidency. Musker stated that most commentators missed a trick in this new plan. He acknowledged that there was no new silver bullet in the plan that was going to turn the SA economy around, but then he said that the authors of this plan realised that they did not need to find a new silver bullet. All of the many previous plans had great ideas – all that was needed was to ensure that this  plan  is  indeed  implemented  and measurable. And  that  is  precisely  the  focus  of  the document.

Reading through the plan with this new perspective, it is encouraging to see that it has prioritised certain projects and goals and has also tried, as far as possible, to put measurable outputs alongside these goals. This plan tried as far as possible not to give a wish list of big goals, but to rather draw up a priority list of projects and objectives. And investment in infrastructure was priority number one. The complete priority list is:

Infrastructure investment is a very good path to pull an economy out of a slump. Not only is it labour intensive, which will assist in reducing the unemployment rate, but it should also facilitate future economic growth. The proviso is that investment is made into those projects which the country’s economy actually needs in order to grow. We can all probably agree that the significant investments in soccer stadiums for the 2010 FIFA World Cup did not do much to enable future economic growth.

So, what are the projects which this plan targets? Most of the plan’s infrastructure investments are allocated according to three main sectors – energy, network industries, and social upliftment. This is already a definite improvement from soccer stadiums.

The investment in energy will be guided by the Integrated Resource Plan (IRP) that was gazetted at the back-end of 2020. According to the IRP, renewable energy will be the key growth vector in SA’s energy mix. The next bid window (Bid Window 5) for renewable energy should be launched imminently (currently targeted for January 2021), with a targeted capacity of 13 813MW. Bid window 5 is thus expected to be greater than all the previous bid windows combined. The split of generation capacity will be as follows: 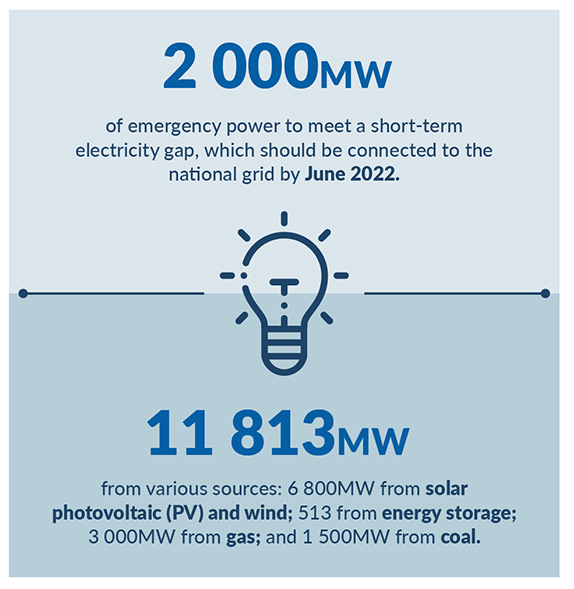 Given the debilitating impact that loadshedding has had on the SA economy, we firmly believe that investment   in SA’s electricity grid will help drive future economic growth, while also ensuring a more sustainable energy mix going forward.

As part of prioritising infrastructure development for network industries, the modernisation of freight and public transport will also be prioritised. In this regard, the following will be implemented:

The South African National  Road  Agency  (SANRAL)  will also play a key role in the investment in network industries. For years, SANRAL has been a reliable source of infrastructure investment doing a credible job at maintaining the national road network, but over the past 3 to 5 years new contracts from SANRAL have been scant. Fortunately, this appears to have turned a corner. JSE-listed construction company, Raubex, recently announced that it has won two multi-billion rand contracts from SANRAL and looking at the tender schedule, which is readily available on the SANRAL website, there will be a few more multi-billion rand contracts awarded over the next few months.

The investment in rails and ports will be managed by Transnet. The main goal will be to improve the capacity of the rail and ports network. At present, many of our mining companies are hamstrung by the limited capacity to export our minerals. The details of these projects  have not been released as yet, but increasing our export capacity will definitely enhance SA’s growth potential.

The question remains though whether the government will be able to implement all of these ambitious projects. Speaking to industry participants the feedback is encouraging. On a conference call with the bankers preparing the documentation for Bid  Window 5, they were very complimentary around government’s willingness to engage with the private sector and turning from the driver of these projects to the enabler. This attitude can also be witnessed in the government’s willingness to allow municipalities to buy electricity from providers other than Eskom and private companies being allowed to generate their own electricity. We can only hope that this change in attitude is maintained.

In the policy  document  itself,  details  are  also  given  on how the government will look to navigate past the capacity  constraints,  especially  at  a  municipal  level.   A single window of entry will be created through the establishment of Infrastructure South Africa (ISA) – a central government agency responsible for coordinating and driving the infrastructure investment programme.

This agency will play a key role in standardising the design for social infrastructure across the country and, in so doing, making the tender process far less complicated, reinforcing the municipalities where capacity constraints arise, and improving coordination across provincial or municipal boundaries where projects often fall between the cracks.

On a conference call with Raubex management, we noted that they were optimistic that the scheduled projects will come to realisation. From SANRAL to the Department of Minerals and Resources, to Eskom, to Rand Water, the engagement from government with the private sector has improved and contracts are finally being awarded.

Given the dire state of the SA economy the lack of urgency from the government has been excruciatingly frustrating. However, it now appears as though the wheels have been turning, albeit slowly, and we are currently in a position where we may start to  see  some  action  on  the infrastructure front locally. And with the prices of major SA export commodities (iron ore and the platinum group metals [PGMs]) continuing to perform  strongly, we may start to see some private sector infrastructure investment as well.

It is still early days, and much can still happen to upset the apple cart, but the stars may just be starting to align for the long-awaited recovery of the SA economy.