Anchor rand view: Is this as good as it gets? 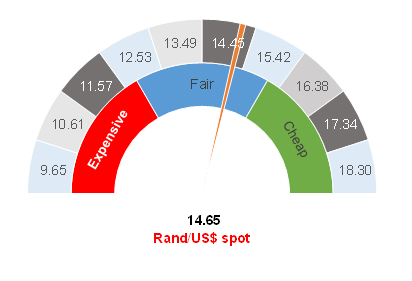 The South African (SA) rand has traded down to c. R14.45/US$1 recently, before weakening again to within our fair range territory of R14.50-R15.00/US$1. This rand weakness and the return to our fair range was driven by US interest rates rising, as the US 10-year bond yield increased from about 1.15% to 1.40% over the past week or so. We note that this upwards move in US 10-year yields was sharper than we had expected. It also sparked a bout of foreign selling in SA bonds (c. R10bn of bonds have been sold by foreign bondholders over the past week). In response, we have seen some pressure on local bond yields (which now represent a buying opportunity), and on the rand. Nevertheless, despite all of these events, we must remember that the rand is still stronger against the US dollar than it was at the beginning of 2021. As per Figure 2, the rand remains one of the better-performing emerging market (EM) currencies (against the US dollar) on a YTD basis.

Figure 2: Rand and other select countries’ currency movements vs the US dollar, YTD % change 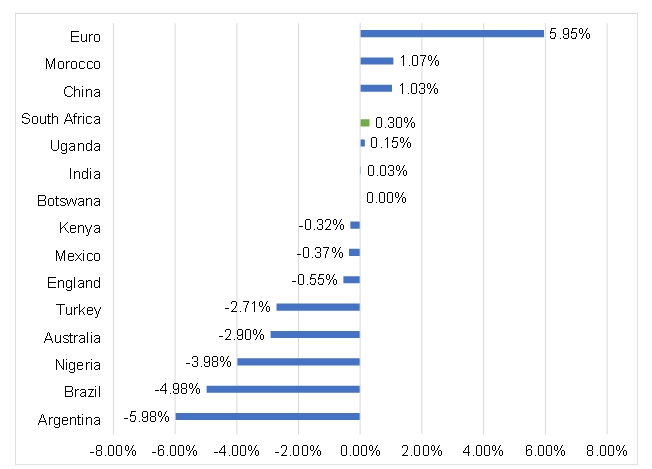 The main question that we are asking ourselves now is how much further will US yields rise? Currently, a major discussion in global markets is the reflation trade, where investors are asking whether inflation might finally recover. In the near term, base effects are going to push US inflation higher, although we retain our view that once these base effects have worked themselves out of the system, the inflation rate will subside once again. The higher headline numbers on US inflation will make the market edgy for a while, even though we expect that current US inflation rates will not be sustained. This means that the near-term risk for the rand is towards weakness, although our base case remains for the rand to bobble along within our target range. If we look through this effect, then our longer-term outlook for the local unit remains biased towards the upside (local currency strength).

On the domestic front, this week it is all about the National Budget, which will be tabled in Parliament on Wednesday (24 February). The long and the short of it is that the government’s credibility is at stake. Any slippage against their fiscal targets will likely be punished by markets. SA is already heavily taxed and tax buoyancy is declining. Therefore, markets will be equally skeptical of any attempts to stabilise the fiscus though tax hikes. The market is looking for a belt tightening effort on the part of government, which we also believe is the realistic and reasonable option. Government finances can only attain stability again with economic growth and any policy that detracts from growth will be met with disappointment. Minister of Finance Tito Mboweni is acutely aware of this challenge and therefore we expect his budget will be short and say very little. We do not really expect much change on the tax, or expenditure, front. However, we believe that the minister will reduce bond issuances going forward. We know that the matters of Eskom and the wage settlements with public service unions remain tied up in the courts and in negotiations. Therefore, the minister cannot really give much clarity on those either. This all means that we expect the budget to be an altogether rather bland affair.

Looking at the rand, it is currently within our fair range and we remain neutral on the local currency, even though the shorter-term risks now appear to be towards slight weakness. 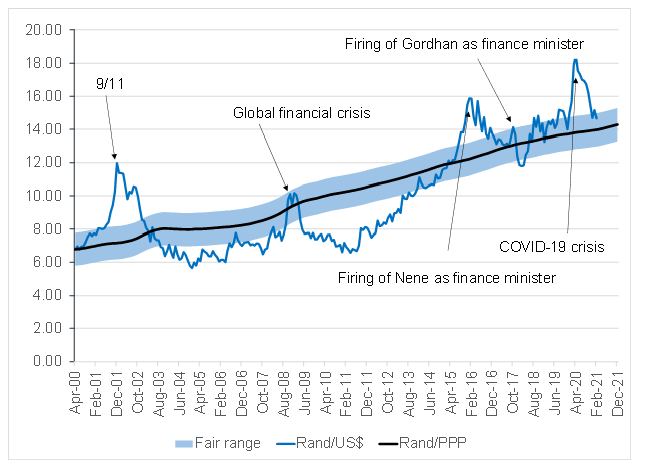