Anchor Agri-view: The SA sugar sector is not looking so sweet

The South African (SA) sugar industry is one of the world’s most cost-competitive producers of high-quality sugar. It makes an important contribution, not only to agricultural employment and sustainable development in rural areas, but to the agricultural economy as a whole. It is a diverse industry combining the agricultural activities of sugarcane cultivation with the manufacture of raw and refined sugar, syrups, specialised sugars, and a range of by-products. Based on revenue generated through sugar sales in the Southern African Customs Union ([SACU] comprising of Botswana, Eswatini, Lesotho, Namibia, and SA) region and world market exports, the local sugar industry generates an annual estimated average direct income of over R14bn, consistently ranking in the top-15 out of approximately 120 sugar-producing countries worldwide.

Stretching across two SA provinces (Mpumalanga and KwaZulu-Natal), the industry provides employment in job-starved regions, often in remote rural areas where there is little other economic activity or employment opportunities. The local sugar industry creates approximately 85,000 direct jobs, representing over 11% of the total SA agricultural workforce. In addition, there are registered cane growers supplying cane for processing to sugar mills. Indirect employment is estimated at 350,000 jobs. Approximately 1mn people or 2% of SA’s population depend on the local sugar industry for a living.

The cane growing sector comprises 21,926 registered sugarcane growers farming in KwaZulu-Natal and Mpumalanga. Sugar is manufactured by six milling companies with 14 sugar mills operating in these cane growing regions. In total, the industry produces an estimated average of 2.2mn tonnes of sugar per season. In SA, sugarcane in irrigated areas constitutes a 12-month crop, which reaches maturity for harvesting anytime between late February/early March until December. In rain-fed areas, the crop cycle is ideally around 15 months, and is harvested between March and December each year. About 60% of this sugar is marketed in the SACU, while the remainder is exported to markets in Africa, Asia, and the Middle East. 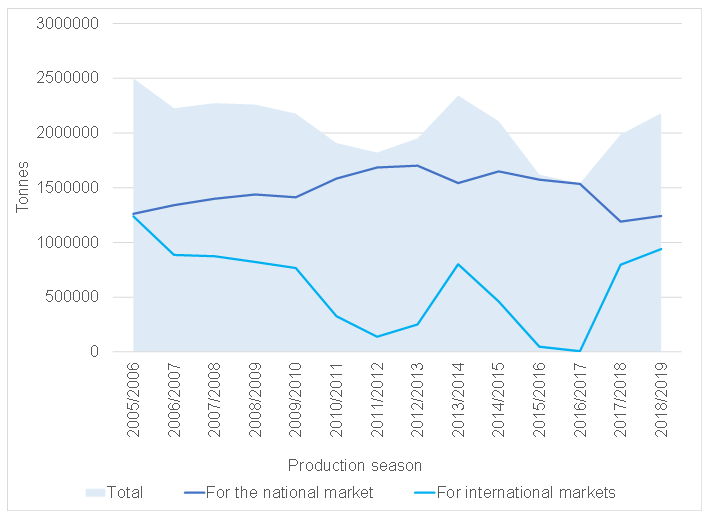 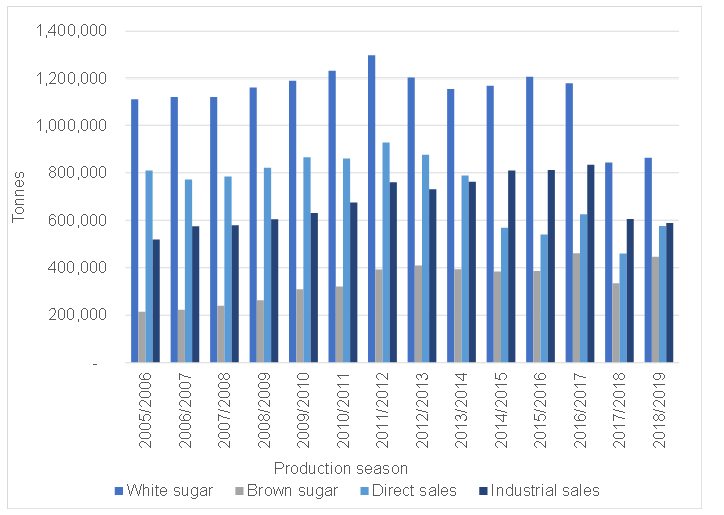 However, despite the sugar industry’s inherent value to SA’s overall agriculture sector (and further growth potential) the industry has lost a total of 20.6% of its cane area since 2000. While area under cane has been relatively stable at around 360,000 hectares since 2016, there is consensus among industry roleplayers that the current situation may not be sustainable, and there could be further contraction over the next 10 years. Importantly, the alternative crops replacing cane are not as labour intensive, thus displacing the many rural jobs that cane provides.

The Bureau for Food and Agriculture Policy (BFAP) estimates that, whilst over the next three years the notional sugarcane price will increase in line with the inflation rate, it will likely not be enough to prevent further contraction. The BFAP expects that, over the baseline period and based on current economic conditions and industry structure, the local sugar industry could lose a further 10% or 36,000 hectares of cane area from 2022 to 2029. 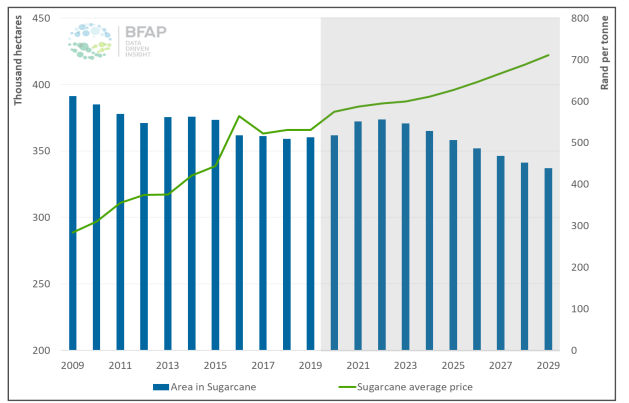 The BFAP further believes that the industry’s contraction is driven by four main issues:

Whether the Masterplan and the various actions outlined by it will be sufficient to prevent the shedding of more hectares is yet to be determined. Overall, we believe that the plan’s overriding objective of a managed consolidation for increased efficiency and a more optimised industry is a step in the right direction. However, amid the rising trend of lower domestic demand levels for sugar (with the continued drive for reduced human consumption), the restructuring or transformation of SA’s sugar industry will by no means be an easy task.