Following a few false starts in late 3Q20 and early 4Q20, the domestically focussed component of the JSE finally broke out of the range it has been in since March 2020’s pandemic-induced market downturn to take a convincing lead over the last two months of 2020. A few catalysts kicked off the early November rally. First up was the US Presidential Election, which saw a change of guard as Democratic Party candidate Joe Biden ousted Donald Trump as US president, thereby removing the overhang brought about by policy uncertainty in the world’s most important economy. Soon after, news started rolling in around the positive efficacy of several COVID-19 vaccine candidates, which kicked off the biggest one-day rotation out of growth and into value stocks that markets have ever produced. EMs were the biggest beneficiaries of this increased risk appetite and SA was no exception, with the FTSE JSE Capped Swix outperforming the S&P 500 by a convincing 14% from the start of November to 31 December (see Figure 1 below). 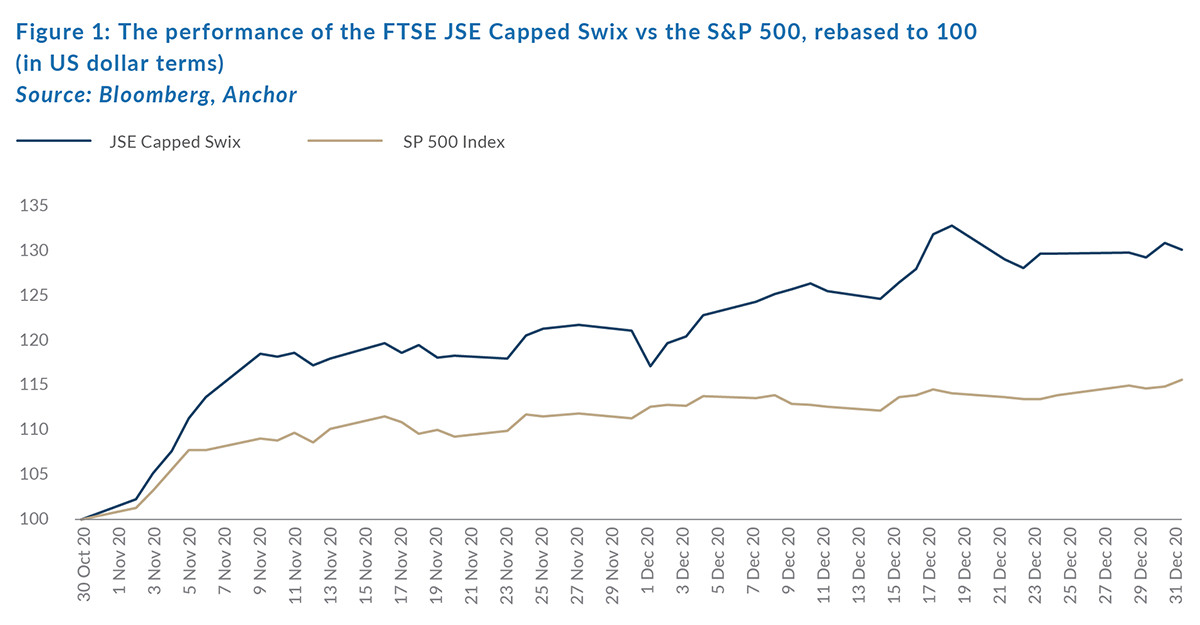 Global markets’ reaction to the vaccine news momentum and the fact that the world had produced several viable vaccines (first, Pfizer announced in November that it had achieved astounding success with its COVID-19 vaccine candidate, then Moderna and AstraZeneca followed in swift succession, with successful vaccine trial results of their own to entrench the positive sentiment) added to the sheer velocity of the inflection.

The question now facing many local investors, is whether the recent rally in domestic assets, including the currency (the rand clawed back c. 30% against the US dollar since its April lows), has further legs as we head into 2021 and how this will influence our thinking on JSE-listed equities in the year ahead. In a world where so much uncertainty remains around the glide path towards some sort of new “normalised” social and economic life, making bold financial projections remains fraught with  an uncomfortably high forecast error and many analysts’ forecasts (including our own) are being whipsawed by continuously evolving economic developments around the world. Locally, the situation has no doubt been exacerbated by the fragile economic position the country found itself in prior to 2020. However, as the interconnectedness of markets has increased over recent years, so too have the factors outside of SA’s control, which can influence the performance of the local equity market.

In saying that, we are not merely referring to the usual notion that “the  JSE offers diversified exposure due to the large component of foreign-based  earnings  on the exchange”, but we are making specific reference to the increased impact that global macroeconomic, and structural changes in markets are having on the prices of JSE equities (as well as on the currency and bonds). In fact, the main reasons we are constructive on the performance of JSE equities over the course of 2021, have very little to do with bottom-up, company specific drivers and are instead more premised on several higher- level, more macro-orientated drivers.

BELOW, WE OUTLINE OUR CORE VIEWS IN THIS REGARD

A global economic recovery, fuelled by loose monetary and fiscal policy around the world, underpins our generally constructive view on EM equities. However, tying this into a constructive view on JSE-listed equities requires a further look at some of the core themes we expect to play out in the various components of the JSE in the year ahead.

Our base-case scenario for SA equities remains an expected return of c. 11% for 2021, although getting the allocation right below the index level will be a key determinant of success.