Pick ’n Pay reported 1H21 results on 20 October, with Group sales growth of 2.6% YoY. This was negatively impacted by the various lockdown measures (especially the ban on liquor and tobacco) as well as weak operating conditions in the company’s African regions, dominated by Zimbabwe and Zambia. For South Africa (SA), Pick ’n Pay reported YoY sales growth of 3.4%, with like-for-like (LfL) growth of 1.7% – inflation came in at 3.4% implying a volume decline of c. 1.7% YoY. Space growth stood at c. 1.7%.

The Group’s gross margin was 19.6% in 1H21 vs 19.8% in 1H20. In our view, this is an impressive achievement especially when considering that clothing and liquor tend to be higher-margin products. Trading profit (excluding the impact of the once-off voluntary severance programme [VSP]) was down 17% YoY, with the trading margin down to 2.2% vs 2.7% in 1H20. The company paid out the FY20 deferred dividend (of R1.73/share) and declared an interim dividend of R0.18/share for the half-year. This was a real show of confidence from management in the robustness of the results and the company’s balance sheet. Cash generation was very strong in the period, with cash from operations of R1.3bn.

The Pick ’n Pay share price has rallied since its trading update on 7 October, which guided these results relatively well. We will not rush to buy at these levels, as we believe we may be presented with better opportunities in future. As can be seen from our forecasts in Figure 1 below, we believe that Pick ’n Pay will recover quickly from the COVID-19 pandemic and that its ROE and headline earnings growth trajectories are very attractive. Although Pick ’n Pay’s valuation is not very cheap (see Figure 2 which provides a good indication of the historic 24-month forward PE), we nevertheless view the valuation as fair in the current environment. 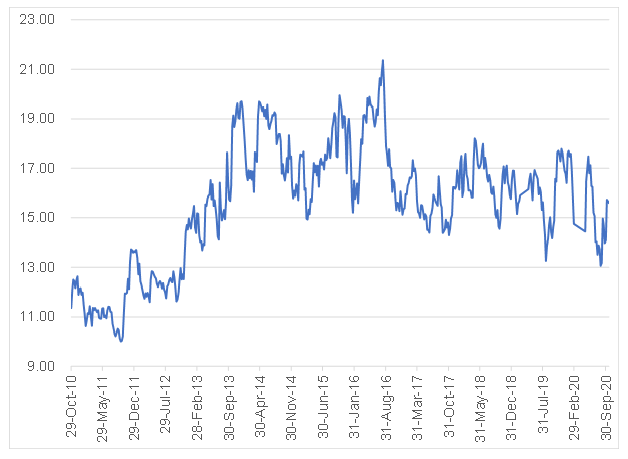 Pick ’n Pay posted a commendable performance in a very difficult operating environment. To us the positives of these results far outweighed the negatives, and we believe that the company is likely to show an improvement in ROE from FY22 onwards. This is due to management’s strong conviction that they will be able to improve the GP margin even further through greater centralisation, a favourable shift in product mix (predominantly clothing), and lower operating costs following a further round of voluntary severance packages. Although we are optimistic on the company’s fortunes going forward, the share price has run hard and we will not be rushing to buy the share at current levels. Nevertheless, we believe that it is a share to keep an eye on and we will use any share price weakness to accumulate.