AVI released its 1H21 results on 8 March, showing a resilient first-half performance in the midst of negative COVID-19 effects and raw material price headwinds. In light of these challenges, AVI’s first-half performance greatly benefitted from a quality and agile management team, which has proven itself to be successful even when navigating a tough operating environment. AVI managed to improve and mitigate significant margin declines by increasing selling prices, instituting cost containment measures and successfully managing volumes and value for its customers. Overall, the 1H21 result was characterised by a recovery in AVI’s retail brands and a return to normalised demand levels in the snack and beverage segments. 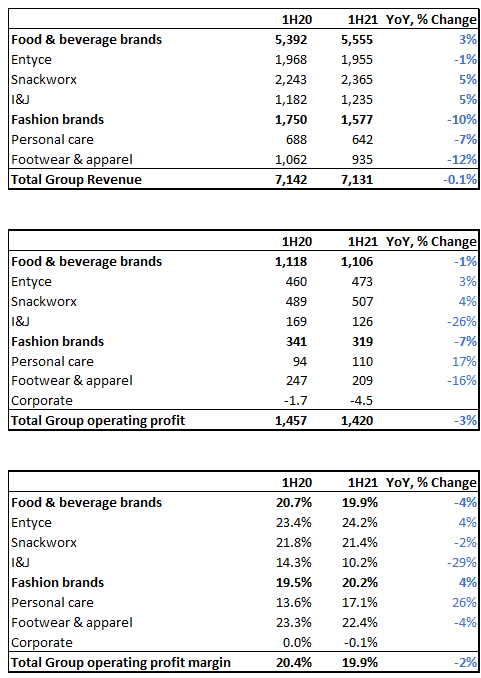 Looking ahead, management expect the constrained environment to continue, and they anticipate weak demand levels to persist, with no meaningful improvement in current operating conditions. We note that management are uncertain about how soft commodity pricing pressures will impact AVI’s operations in FY22 as its hedging programme rolls off in FY21. Overall, however, the team said AVI will continue to focus on cost containment measures in a weak environment and to review its business model considering the unexpected challenges brought about by the pandemic. We expect subdued volume sales and continued elevated soft commodity prices to be an operational headwind within the Food producer space in the short term.