Epic Games, the 40% Tencent-owned developer of the hit online video game, Fortnite and game creation/ development platform, Unreal Engine, which is used by c. 50% of the video game industry to create video games, recently publicly criticised Apple for its App Store policies. Although other companies have in the past complained about Apple’s policies, Epic’s complaints are particularly noteworthy given Fortnite’s cultural and financial significance – the game has become a cultural phenomenon, with c. 350mn registered users.

On iOS (Apple’s mobile operating system) alone, users have spent c. $1.2bn on Fortnite since its launch in July 2017. In this note, we examine the Apple App Store’s fees and policies, look at the reasons why Epic is unhappy about these fees and policies, and discuss the current battle between the two companies.

What fees does the Apple App Store charge?

Apple charges app developers a 30% commission rate when App Store users download paid apps or make in-app purchases. However, there are subtle distinctions to that 30% figure. For example, in the case of subscriptions the commission drops to 15% after 12 months, while in the event of the purchase of physical products or services via an iOS app, Apple does not charge a commission. For multi-platform apps (e.g. desktop and iOS), content may be accessed without Apple collecting a fee. For example, a subscription purchased on a desktop can be accessed in the iOS app without Apple collecting a fee, although apps cannot divert users away from making in-app purchases (through mechanisms such as external links that bypass the App Store) to avoid paying App Store fees.

What is Epic unhappy about?

Epic’s unhappiness with Apple can be categorised into three complaints. First, Epic believes the 30% commission rate which Apple charges is exorbitant. Consumers, in Epic’s view, pay higher prices for apps as a result. Epic points to competing payment processing services such as Visa, MasterCard, and PayPal, which charge 2.5% to 3.5% in commission.

Second, Epic believes that Apple has monopolised access to its user base of over 1bn iOS devices because iOs device users cannot install software directly from developers. Instead, consumers have to use the Apple App Store to access this software, forcing developers to give Apple a 30% cut of their sales as commissions. Android is an open platform (i.e. Google allows third-party software to be installed via the web), but Google Play enjoys a majority market share for Android stores. Finally, Epic also accuses Apple of restrictive App Store policies which stifle innovation, arguing for example, that the World Wide Web would have been blocked by Apple if it had been invented after the iPhone. That is because within its App Store, Apple does not allow code or content that Apple has not reviewed or the ability to accept payments directly from consumers.

What has Epic Games done about it?

Epic gave users the ability to bypass Apple and Google’s payment systems. Fortnite players could use Epic’s direct payment option and pay lower prices as a result (see Figure 1). In response, Apple blocked new Fortnite installations and even Fortnite updates on the App Store. Google has also blocked Fortnite from Google Play. In addition, Apple terminated Epic’s developer accounts, which means that Epic cannot make software for any Apple devices, whether that software is Fortnite, other Epic games or Unreal Engine. 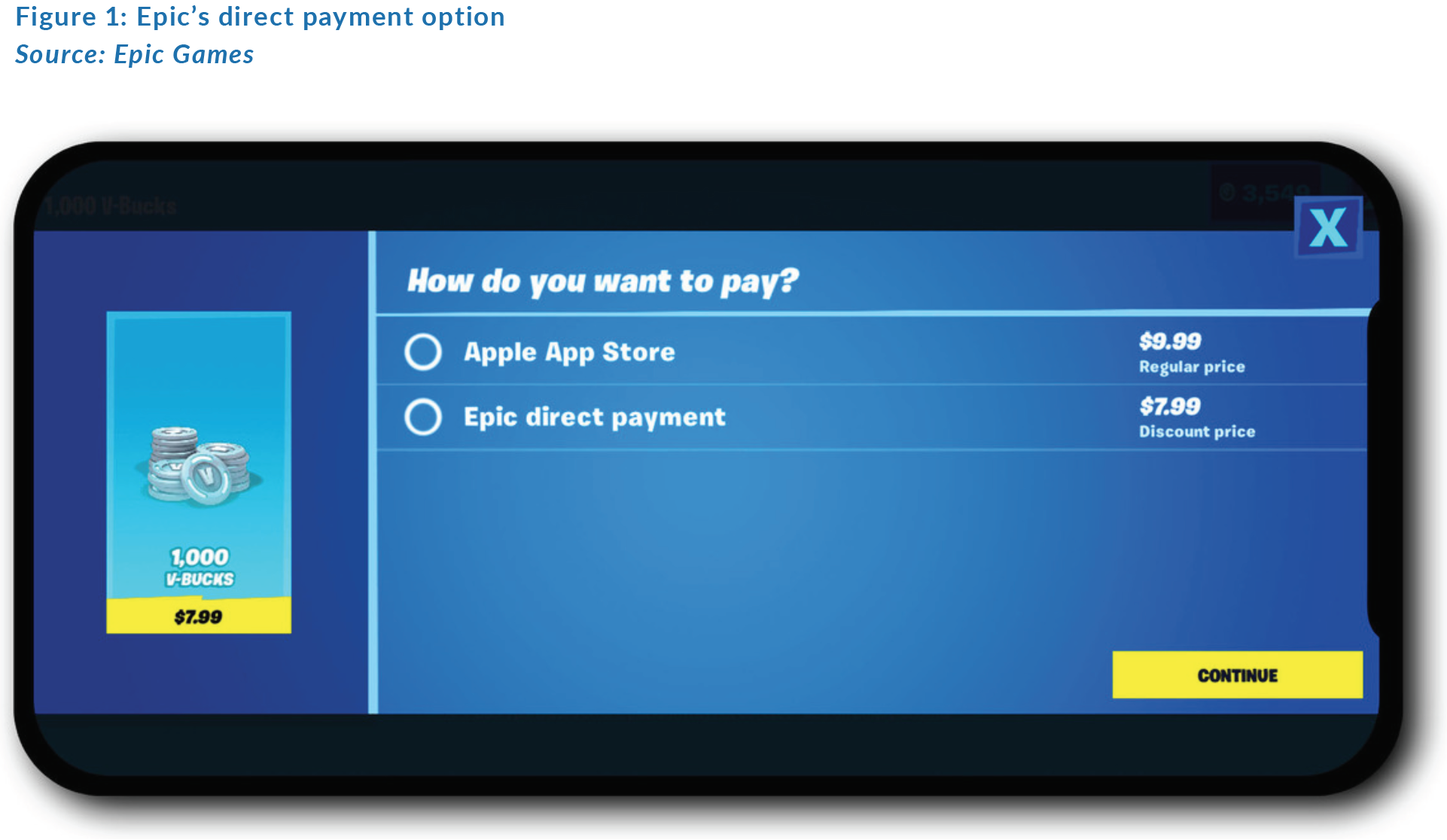 What is Apple’s argument? 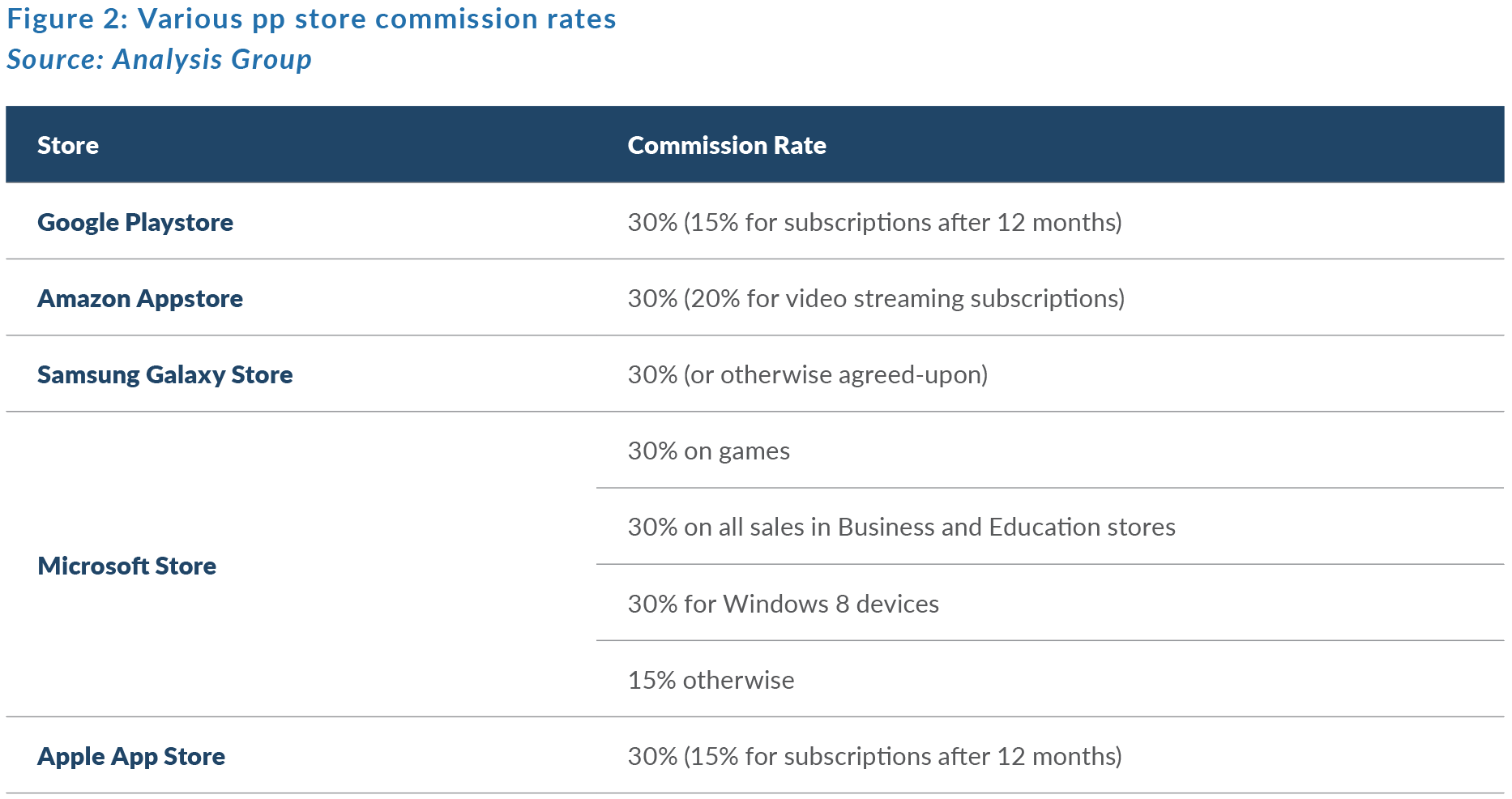 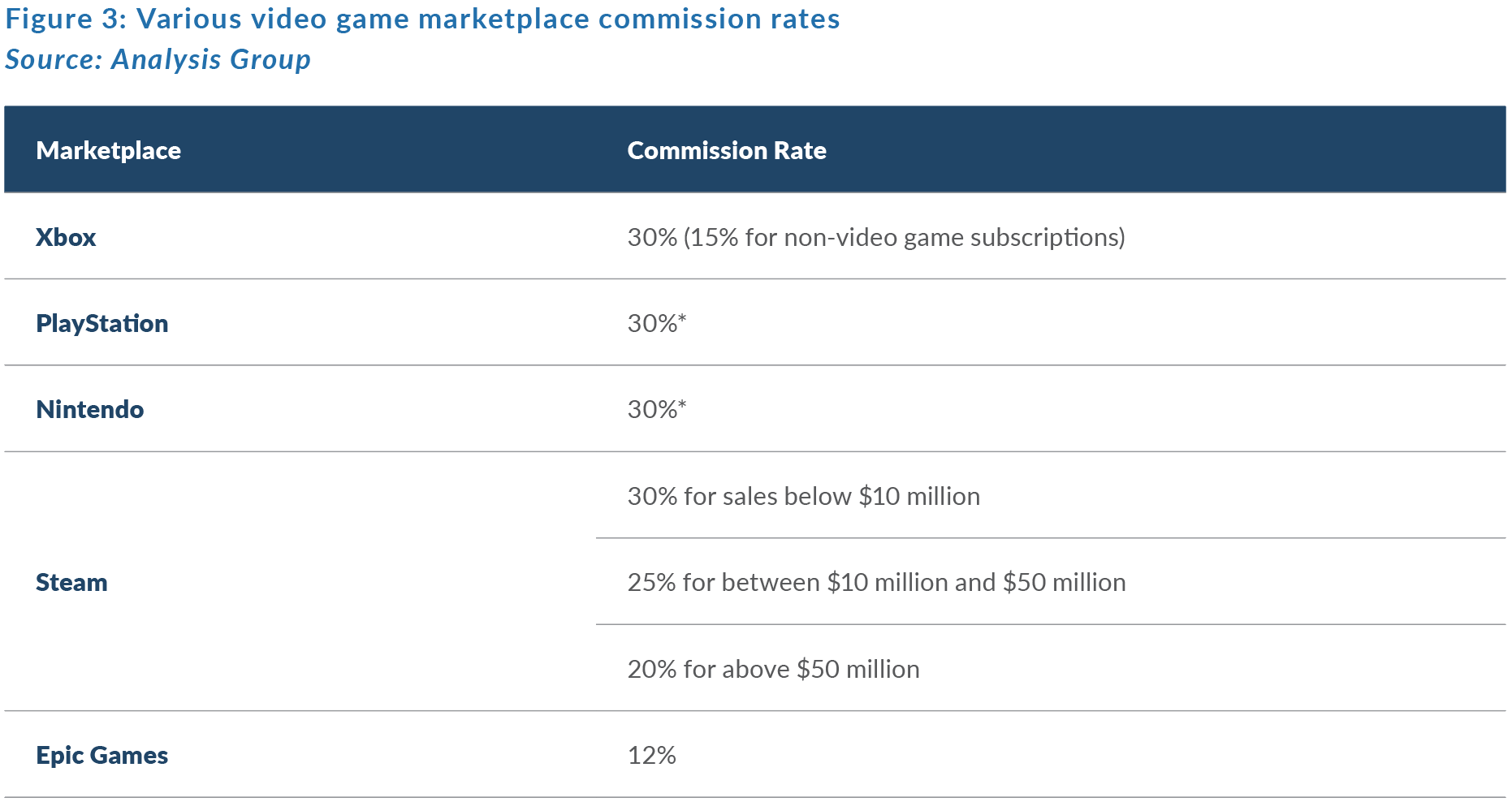 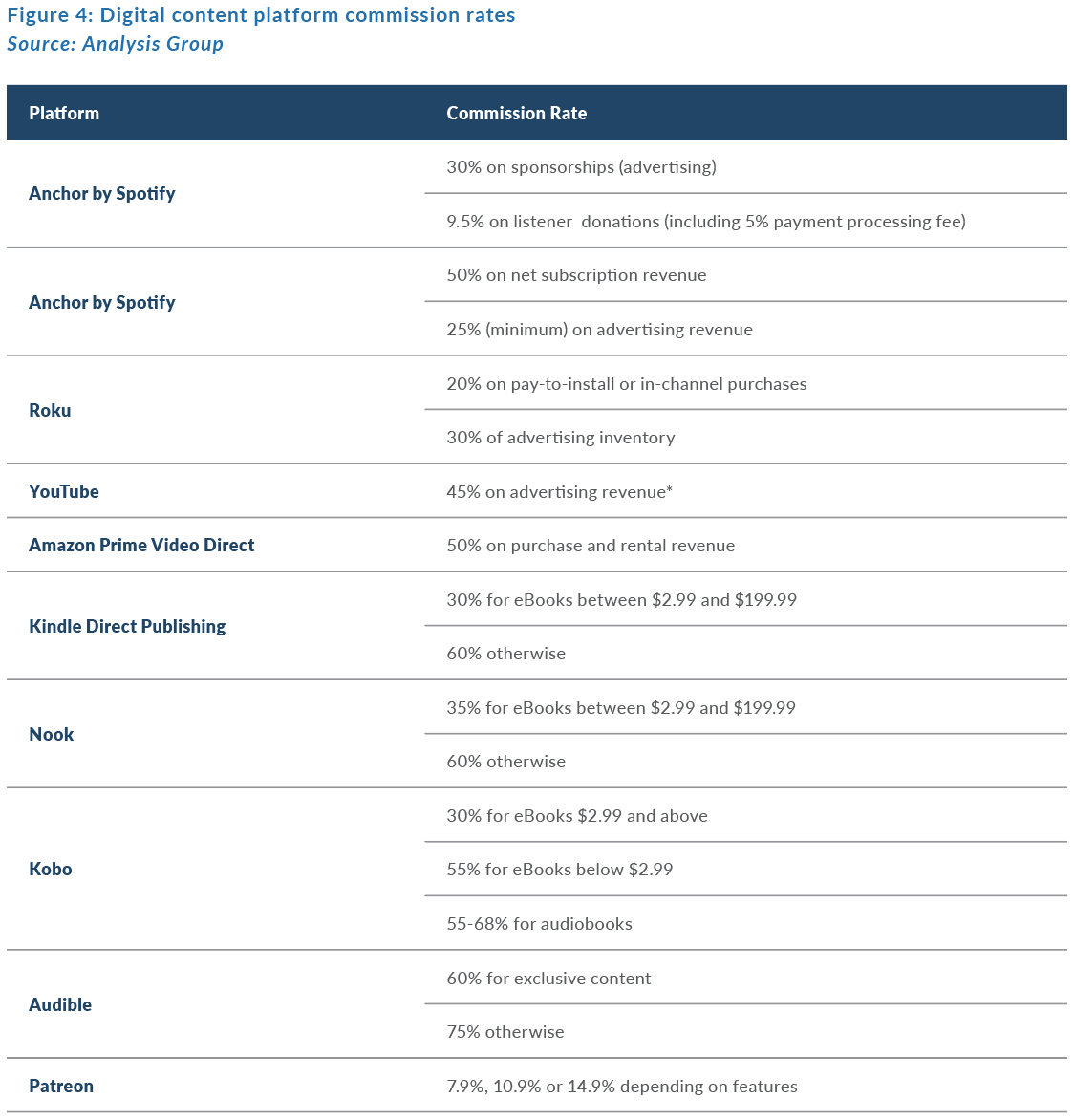 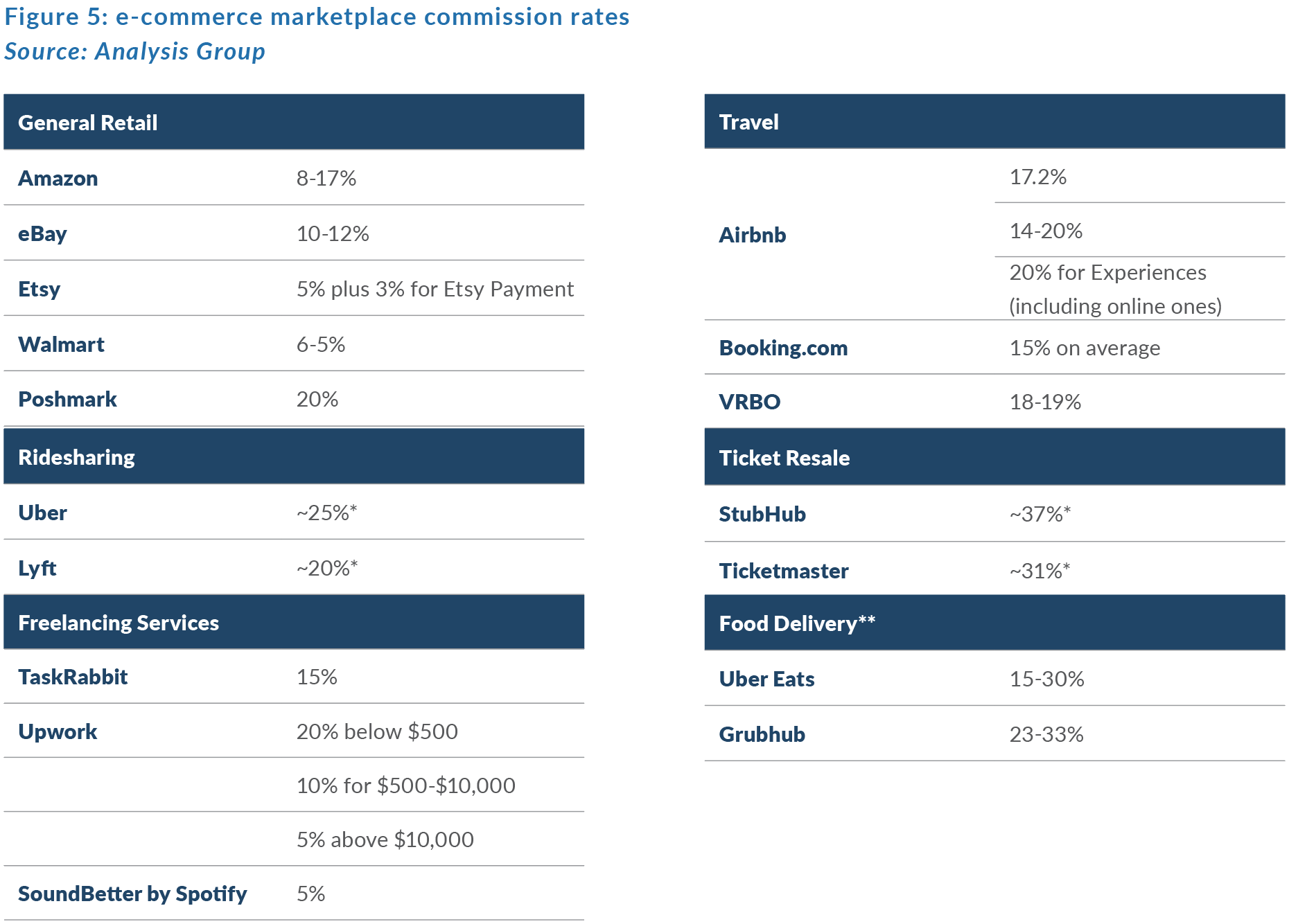 *Commission rate from third-party sources, not disclosed by the marketplace.
**Standard seller commission rates only.

The study also argues that Apple’s commission rates are very attractive to developers when compared to the low proportion of sales that software and content developers receive from sales in the brick-and-mortar world. As Figure 6 below shows, software developers retain about 35% of a boxed software retail price, while video game developers keep slightly more (about 45%). The study estimates that physical production and distribution costs account for 50% and 60% of newspaper and magazine sales, respectively, while food producers typically pay retailers 15%-20% of sales for in-store placement. 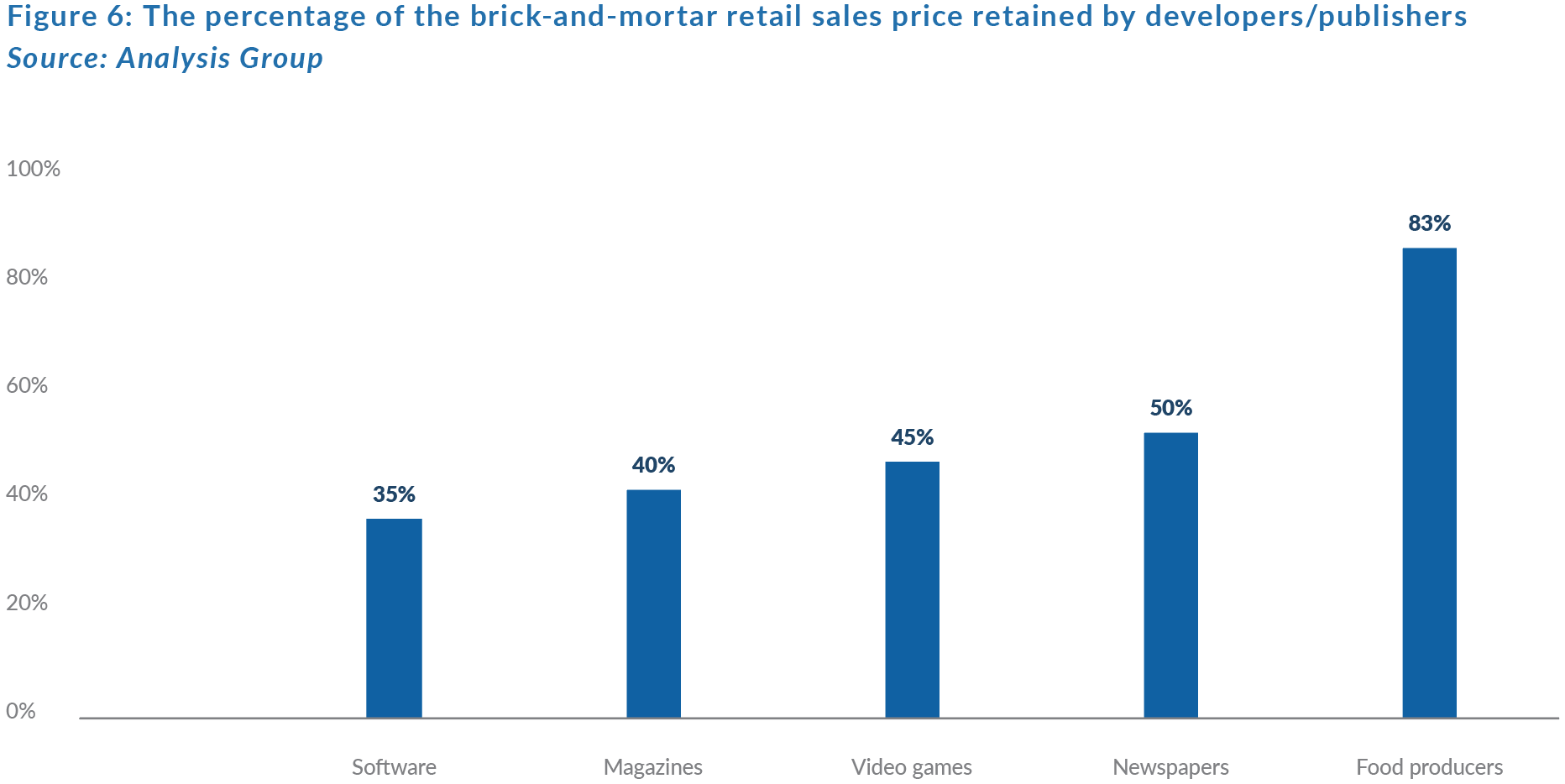 Apple points to several other benefits of its App Store, including the fact that it charges no commission on purchases of physical products and services through the Apple App Store (i.e. a commission is only charged on digital goods). Developers set the prices for apps on the App Store.

The app review process ensures all apps are safe and meet performance, design, and legal standards. Apple invests significantly in its ecosystem and its transaction-based commission rates help smaller developers by lowering the upfront costs of entering the market.

It remains to be seen how this fight over the App Store will play out. For Apple, App Store fees represent an important part of its push to have its services segment become a major growth engine for the company.

For App Store developers with clout, like Epic Games, the App Store now represents an overly costly way of distributing software to a user base of over 1bn iOS devices. However, what does seem to be a certainty is that the status quo is unlikely to continue indefinitely.