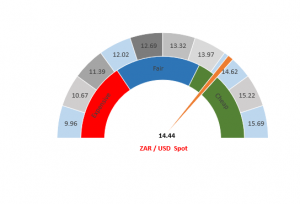 The rand pushed considerably weaker toward the tail-end of last week as US President Donald Trump engaged in renewed trade-war rhetoric. The spat with China continues, whilst it seems that Mexico has also now come in for some criticism and trade threats from Trump. As a result, the outlook for global economic growth is deteriorating. We have seen this sequence of events several times already. The financial markets respond with lower global yields (the US 10-year bond is at 2.10%), reflecting the likely slower trend growth in the US. The events unsettle markets with equities coming under pressure whilst the dollar strengthens. To a South African, this just looks like a weaker rand while in fact many other factors are at play. We even saw the local currency spike towards R14.87/$1 last week.

As can be seen from Figure 1 above, this is outside of our fair value for the rand and we believe that normal counter-balancing events in the market will bring the currency back in-line over time. The first of these is that, with US bonds having rallied to 2.10%, South African bonds are looking quite attractive to foreigners. We saw foreign buying of over R1bn in SA bonds on Monday (3 June) alone. At the same time, the weaker outlook for the US economy is starting to worry the US Federal Reserve (Fed), with St. Louis Fed President James Bullard, who has a reputation for being hawkish, making comments on Monday that the Fed will need to cut rates soon to “counter the risks from President Trump’s trade war”. These factors have meant that we have seen some recovery in the rand.

However, South Africa has not been doing much to improve its outlook, with the CEOs of both Eskom and SAA resigning over the past week or so. Perhaps the situation at SAA is the more worrying of the two, in part because the national carrier has already asked for another R3.5bn to repay a looming loan, and partly because the outgoing CEO resigned in response to the government, as shareholder, blocking him from executing the turnaround plan that they had initially agreed on. The IMF has clearly warned that South Africa needs to address its fiscal deficits and that this will mean difficult, unpopular and painful decisions. Until these actions are taken, the trajectory of our economy and fiscal status remains concerning.

While we are worried about the fiscal outlook, we remain of the view that a ratings downgrade from Moody’s is closer than people think, although we also acknowledge that the rand is slightly oversold. We were reducing our US exposure while the exchange rate was above R14.85/$1 and we will now remain slightly underweight the US dollar while this plays out. 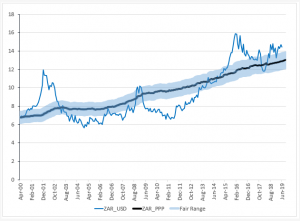