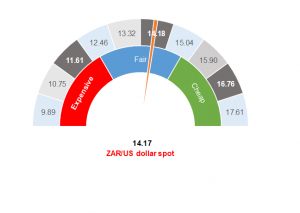 December 2019 served to prove that no matter what the domestic situation, a globally accommodating environment will strengthen the rand. Thus, we saw the rand strengthen by about 4% for the month to end the year close to Anchor’s fair value.

It seems to us that this supportive environment will persist for the next while, with the US and China expected to sign a preliminary (or phase-one) trade deal on 15 January. This will likely see China increase its imports from the US again, with China also pledging to protect intellectual property rights. We believe that this will further ease tensions that have been weighing on global markets, with emerging markets (EMs) in particular likely to benefit. Similarly, it appears that the UK will leave the European Union (EU) at the end of this month and, although Parliament continues to scrutinise UK Prime Minister Boris Johnson’s deal, it is likely to pass with few amendments. These receding global risks make for a risk-on environment and will continue to be supportive of the rand.

Nevertheless, despite the favourable global environment, domestically we continue to score own goals with Eskom already having instituted load shedding once this year. The World Bank has also cut SA’s economic growth forecasts to below 1% for 2020 and confidence levels are in the doldrums. This year, 27 March will also have a special significance for the country as that is the date of Moody’s next review (Moody’s is the only ratings agency among the big three to have kept SA’s rating at investment grade, although it changed the outlook from stable to negative in November). We think that the market is pricing in a 67% probability of a downgrade. It is reasonable to expect that the fear factor will push the rand weaker as we head into Finance Minister Tito Mboweni’s budget speech at the end of February and the rating review a month later. Against this backdrop, the SA Reserve Bank’s Monetary Policy Committee (MPC) is meeting this week. However, in our view, the MPC will keep interest rates on hold given the domestic risks. The MPC’s decision will be announced on Thursday (16 January).

We expect that the rand will be weaker during 1Q20, although the forgiving global environment should keep this muted as we head towards some binary events for our country. 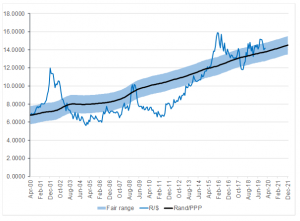