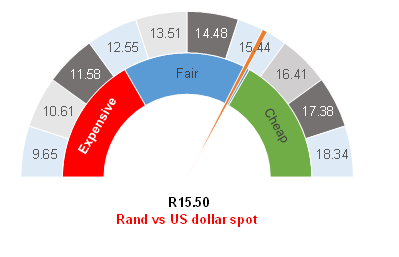 On Tuesday morning (9 March), the rand was trading at around R15.50/US$1, which is significantly weaker than when we published the previous Anchor rand view, dated 24 February 2021. The theme in markets currently is that US 10-year bond yields need to be higher, and the crowded trade is hedge funds short-selling bonds. While this trade has stopped for now, because it is becoming difficult to find bonds to borrow for the purpose of short selling, we nevertheless believe that higher US growth rates, the possibility of higher inflation, and funding requirement for the recent US stimulus package might keep bonds at around current levels for a while. Bonds are now trading at levels similar to where they were before the COVID-19 crisis started and we think that this is close to the long-term, fair yield on bonds.

Higher US bond yields have also sparked a frenzy of selling emerging market (EM) assets. The rand has felt the weakening pressure, however, the local unit has not been one of the worst hit EM currencies with the Brazilian real, the Russian ruble, and the Turkish lira faring far worse. Since Valentine’s Day (14 February), foreigners have sold c. R45bn of South African (SA) bonds. This is equal to about 70% of the total selling we saw last year, when the rand shot up to R19.36/US$1 and local bonds were trading at 13% yields in a dysfunctional market. However, this time around the market has functioned effectively and these movements in yields and in the currency have been more orderly.

Against our metrics, we view SA bonds and the rand as being oversold, and we think that they offer good value at present. Last year, we were vocal about the prospects for the rand and bonds recovering. This time around we again expect a recovery, albeit of a smaller magnitude. We are hesitant to call the top, or the bottom, of a market, but we are suggesting patience for those clients looking to buy US dollars. Similarly, while our income funds have been negative for the last while, we advocate patience, while these funds continue to generate income and, in our view, they should recover at some point.

Looking to the domestic front, proposed changes to pension fund regulations have been published. There are no prescribed assets and we think that the proposed allowance for investing in infrastructure projects is a little too high and that limiting the allowance to government projects only is counterproductive. Nevertheless, we do see the draft pension fund regulations in a positive light. SA savers have been fretting about the risk of prescribed assets and fearing the worst. This draft does nothing nefarious and, instead, should calm those fears. SA continues to manage itself along orthodox lines and we should view this in a positive light.

Looking at the rand, it has pushed just above our fair range of R14.50-R15.00 vs the US dollar. We can see this in Figure 1 and Figure 2. Still, we continue to believe that our fair range will hold, and we see scope for the rand to recover as global bond yield movements calm down. We remain neutral on the local currency, even though the shorter-term risks now appear to be towards slight strength. We are maintaining our current currency positions in the portfolios, while we have been seeing higher yields as an opportunity to buy short-dated SA bonds. 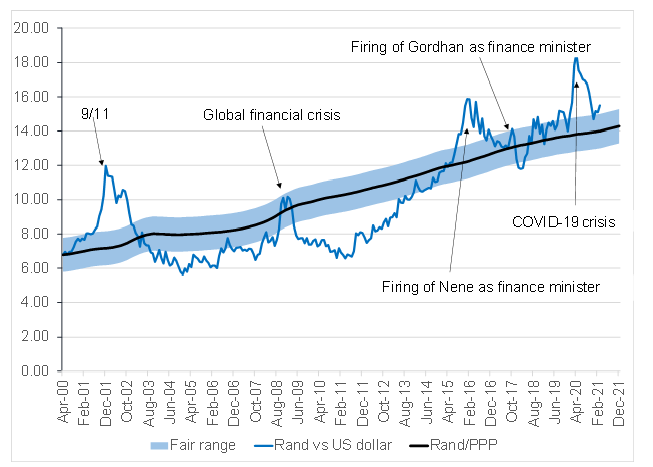