2020 has proved to be a remarkable year for growth in the agricultural sector, notably occurring at a time when all other sectors in the South African (SA) economy experienced significant contractions because of the global COVID-19 pandemic. The SA economy saw a record annual decline of 7% YoY in 2020 – its biggest contraction since at least 1946. In contrast, the local agricultural sector posted annual real GDP growth of 13.1% YoY and was also the only sector (apart from government services) that recorded any expansion. As illustrated by Figure 1 below, the large decline in economic activity in the agricultural sector between 2015 to 2016 and again from 2018 to 2019, was as a result of drought conditions and the impact of animal diseases. It was, therefore, anticipated that there would be some form of a recovery in 2020. However, in a year with such volatility and multiple exogenous shocks to the country’s economy, such growth is indeed remarkable. 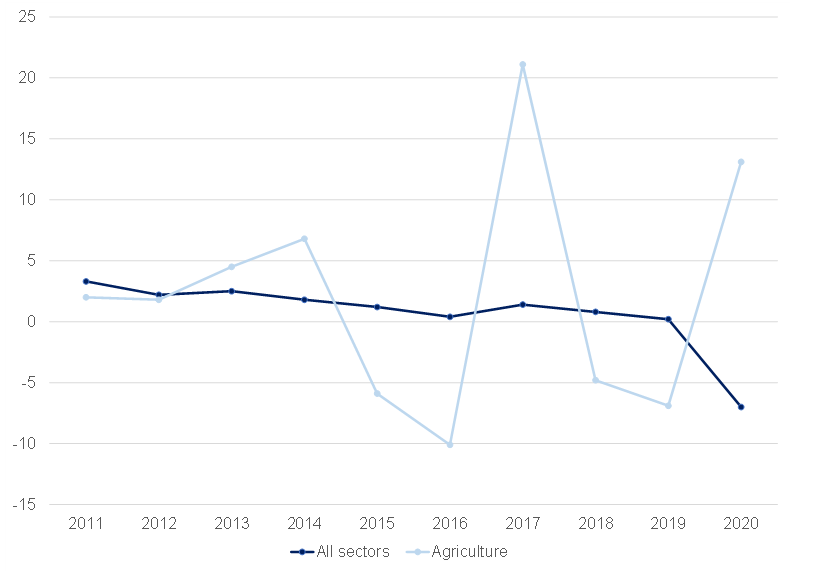 In total, the local farming sector recorded income growth of 7.3% YoY. Here, income from the maize industry contributed the largest proportion (+2.8% YoY growth), followed by eggs (+1.3% YoY) and citrus (+0.9% YoY). These industries made a large contribution owing to their relative size and strong growth in output, whilst benefiting from fairly normal operations, despite the myriad of restrictions associated with COVID-19. Smaller industries that also posted large increases in 2020 were oats, groundnuts, ostrich products, canola, mohair, and barley. Whilst most sub-industries contributed to the positive growth picture in 2020, there were some agricultural industries that also contributed negatively to GDP. Naturally, they were those sectors most affected by the COVID-19 regulations and subsequent weak demand, such as flowers, tobacco, and the cattle farming sectors. It is also largely expected that the full negative impact of the pandemic on wine grape farming will only be realised in the coming months. In aggregate, gross farm income expanded by c. 7.3% YoY in real terms, whilst the subdued inflation on agricultural input assisted the sector further, leading to annual agricultural GDP growth of 13% YoY.

Looking at quarterly growth in more detail, SA’s seasonally adjusted and annualised GDP increased by 6.3% YoY in 4Q20. This follows a massive 67.3% QoQ jump (albeit from a low base) in 3Q20 following the easing of COVID-19 restrictions, which had severely impacted the local economy in 2Q20. The biggest contributor to 4Q20 GDP growth was the manufacturing sector with a 21.1% QoQ contribution.

In general, we note that the agricultural sector’s quarterly performance is often complicated to dissect, especially given the timing of delivery by various subsectors (i.e., seasonal output fluctuations). However, the quarterly data still provide valuable insights to consider. Relative comparison of 4Q20 numbers to that of the 4Q19 performance, removes the need for seasonal adjustments and provides an alternative, simpler picture of SA’s agricultural performance in 4Q20. Overall, real agricultural GDP continued its run of consecutive quarterly growth since 4Q19, growing by 6% QoQ in 4Q20, and by 21% YoY. 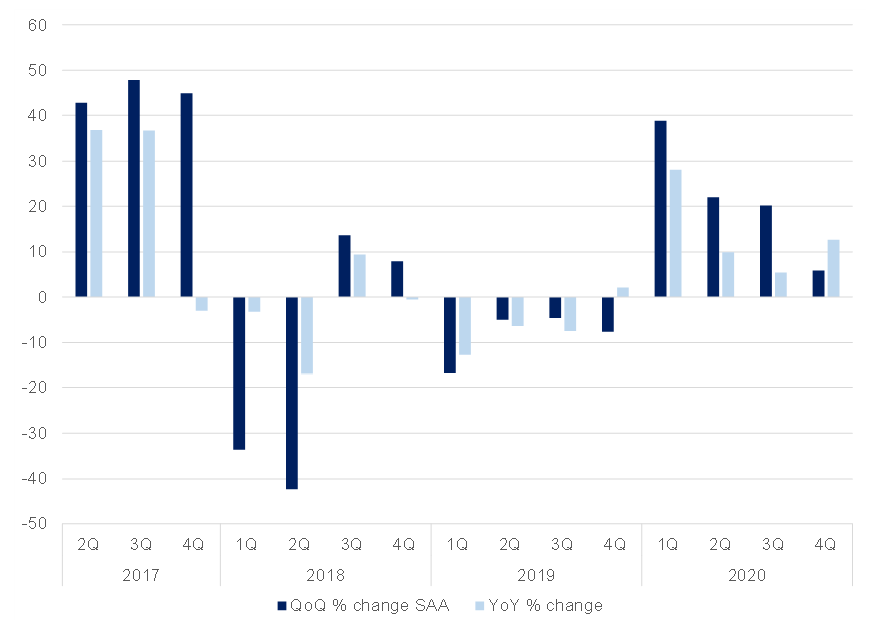 Overall, the local agricultural sector performed well in 4Q20, with all three sub-sectors also showing real growth. Once again, field crops made the biggest positive contribution to the sector’s growth, with a 28% YoY increase in the gross value of agricultural production (GPV). The winter grains and oilseed harvests were the main reason for the strong performance, with record harvests also recorded for wheat, barley, and canola in the Western Cape. In comparison to 4Q19, the 2020 GVP for these industries had a combined increase of 45% YoY. These large harvests were also supported by good price levels.

Overall, the 4Q20 results, and the combined data for 2020, suggest that the agricultural sector had an exceptional year of growth in 2020. Looking ahead to 2021, the Agricultural Business Chamber of SA (Agbiz)/IDC Agribusiness Confidence Index (ACI) has improved from 61 points in 4Q20 to 64 in 1Q21. This is the index’s highest level since 2Q14. A level above the neutral 50-point mark implies that agribusinesses are optimistic about operating conditions in SA. In context, these results likely reflect not only the robust performance of the local agricultural sector in 2020, but also indicates positive early signs of momentum for another season of large harvests in 2020/2021 from most subsectors. The latest 1Q21 survey was conducted in the first two weeks of March 2021 and covered agribusinesses operating in all agricultural subsectors across the country. 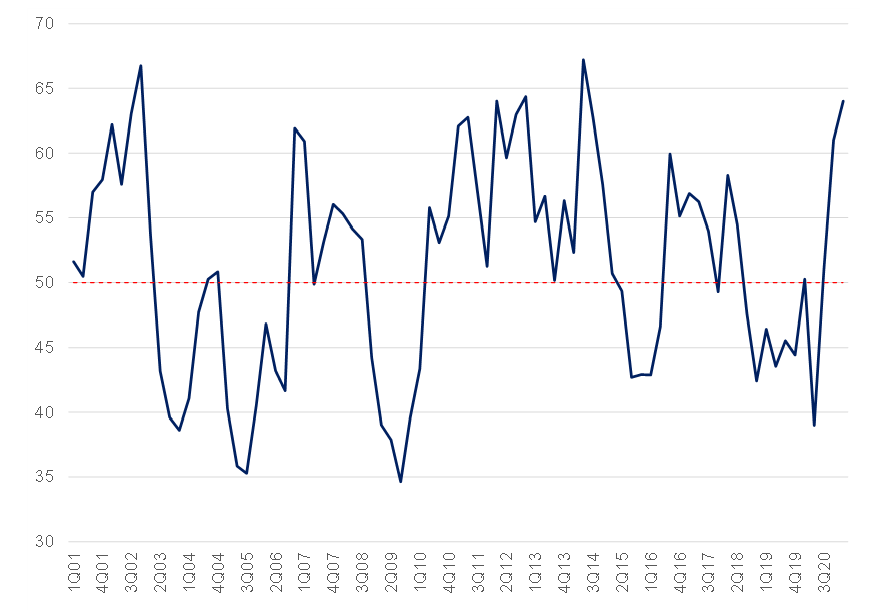 Overall, the Agbiz/IDC ACI’s 1Q21 results indicate that SA’s agricultural sector will most likely experience another year of robust growth. The underpinning driver currently is favourable weather conditions that have allowed farmers to plant on time and to also increase area plantings for various crops. In addition, higher commodity prices have contributed positively to farmer’s finances, thus resulting in better sentiment. Nevertheless, it is important to remember that industry-by-industry analysis shows that growth numbers are only an aggregate story of agriculture. The wine and tobacco industries (which were arguably the hardest hit by sales bans during SA’s various lockdown stages) remain financially constrained and will take longer to recover as we move further into 2021.