Despite experiencing four consecutive quarters of contraction (1Q19-4Q19) and ongoing challenges due to the global COVID-19 pandemic, South Africa’s (SA’s) total agriculture sector rebounded by 27.8% QoQ, seasonally adjusted and annualised, in 1Q20. Furthermore, primary agricultural employment increased 3% YoY (c. 27,000 jobs added) to 865,000 jobs, although this was marginally down QoQ (-2.0%). This recovery has been underpinned by strong activity in all major agricultural subsectors including livestock, field crops, and horticulture production. The significantly improved activity across the various subsectors was largely driven by favourable weather conditions during the 2019/2020 production season.

From a field crops perspective, SA expects its second-largest grains harvest on record in 2019/2020. These latest projections for the 2019/2020 maize, sunflower seed, and soybeans harvests point to YoY increases of 38%, 13%, and 8%, respectively, and is equivalent to output levels of 15.5mn, 765,960 and 1.3mn tonnes, respectively. Moreover, local sugar cane production is set to increase by 1% YoY to 19.4mn tonnes. In the case of horticulture, SA has generally had a good fruit harvest YTD, with the citrus industry recently noting a 13% YoY increase in available supplies for export markets in 2020. There is also a broad recovery in the production of deciduous fruit, with 2020’s apple and pear production up by 5% and 1% YoY, respectively. Whilst the livestock subsector has also been resilient, the latest outbreak of foot-and-mouth disease posed a significant challenge at the beginning of the year.

As it stands, the agricultural sector’s 2Q20 data looks set to continue its positive trajectory, with SA’s Agricultural Business Chamber (Agbiz) forecasting 10% annual YoY growth for the sector (vs a 6.9% YoY decline in 2019). The aforementioned factors will continue to be the primary drivers of economic activity in the sector. However, despite this largely positive outlook, significant downward risks remain. Agricultural employment data for 2Q20 will likely not be as robust as in 1Q20, as social-distancing regulations, introduced at the end of March, would have hampered farmers and agribusinesses from increasing employment, particularly with regards to seasonal workers. Furthermore, ongoing economic uncertainty could negatively impact financing of the agricultural sector, as commercial banks are likely to be more risk-averse in the current unprecedented environment. This, compounded by the Land Bank’s financial woes, poses significant risk regarding capital availability for the sector. Moreover, reinstating a ban on alcohol sales, as announced by President Cyril Ramaphosa on 12 July, has dealt another blow to the local wine industry, which has already lost billions this year due to COVID-19 related lockdown regulations. With the duration of the alcohol ban uncertain, its effects will be felt throughout the wine industry’s value chain.

Interestingly, the Agbiz/IDC Agribusiness Confidence Index (ACI), which has in the past proven to be a strong indicator of the agricultural sector’s growth path, fell from the 50-point mark in 1Q20 to 39 in 2Q20. A level below the neutral 50-point mark implies that agribusinesses are downbeat about prevailing local business conditions. The ongoing COVID-19 crisis is primarily a health shock, but its impact on the economy has been severe and these sentiment results are a subsequent reflection. Notably, this print is the lowest level since 3Q09 – at the height of the global financial crisis. The ACI will likely continue to print below the neutral 50-point level throughout 2020 due to the negative sentiment caused by COVID-19, thus leading to a possible disjoint between agribusiness confidence levels and the sector’s actual economic performance. 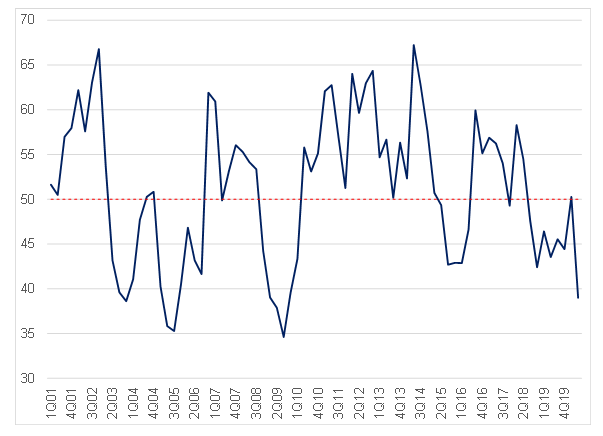 Whilst the positive rebound in the agricultural sector’s GDP is indeed a welcome development, the question remains – where do we go from here? A positive 1Q20 growth print is one thing, but how does SA maintain a positive trajectory to create sustainable long-term growth for the sector as a whole?

This past week, the African National Congress’ (ANC’s) economic transformation committee and Business for SA (B4SA), each released discussion documents about a post-COVID-19, inclusive SA economy. As an identified priority sector for growth and job creation, agriculture features prominently in both documents. Positively, both the ANC’s and B4SA’s agricultural development views are framed from chapter six of the National Development Plan (NDP), which highlights a need to expand irrigated agricultural land by one-third (by 2030), expand commercial agricultural production, as well as prioritise subsectors and regions that have high potential and are labour intensive. There is also a focus on the need for increased transformation in agriculture and its value chain. Both plans recognise that poor infrastructure, both in SA’s former homeland regions and general logistics surrounding the movement of produce to ports and processing plants, is an area that needs urgent attention.

Another point of commonality that arises from both economic recovery documents is the need to improve agricultural finance through stabilising the Land Bank. SA’s agricultural economists have long beaten the drum that the next frontiers for growth in the sector will be the expansion of production mainly in the former homeland provinces (KwaZulu Natal, Eastern Cape and Limpopo). The Eastern Cape and Limpopo have been amongst the provinces with the least contribution to domestic agriculture’s gross value added, respectively accounting for 6% and 7% of the total. Meanwhile, provinces such as the Western Cape, Free State, Mpumalanga, to name a few, contribute 22%, 10%, and 9%, respectively. This begs a further question, why has agricultural development lagged over the past two decades in these provinces on the one hand, while commercial agriculture in other areas doubled output on the other?

There are several reasons explaining this apparent disparity, the most notable being lower levels of investment in agriculture and a general lack of infrastructure. With regards to investment, poor land governance (i.e. lack of secured tenure), both in the former homelands and some underutilised land-reform farms, have been key impediments which disincentivise on-farm investments. Furthermore, the lack of basic infrastructure (road networks, rail, silos, irrigation systems and a stable water and electricity supply), has contributed to low agricultural productivity and poor linkages to markets for smallholder farmers. In an era where consolidation and fiscal prudence are proving vital, the tightening of already scarce government resources translates to an ever-growing challenge on how to close the infrastructure gap. Unlike the mining sector, where the private sector predominantly leads and paves the way in the effort of building public infrastructure, agriculture (particularly smallholder farming in the former homelands) relies mainly on state-led and government-supported initiatives in developing the required public infrastructure that supports overall production and market access.

With government resources stretched to their max, there is much scope for private sector driven infrastructure development. Developmental projects surrounding areas such as irrigation systems, silos, electricity generation and packhouses can easily be led by the private sector. In other essential infrastructure projects such as roads, rail and dams, government is still required to be the lead driver. There is, however, room for a private-public-partnership approach, particularly for major agribusinesses that are aiming to expand within potential high-growth areas such as the Eastern Cape, KwaZulu-Natal, and Limpopo. This approach will, however, need to be a bottom-up one, where agribusinesses identify the binding constraints to development in specific areas of interest and then co-finance infrastructure development aimed at addressing these concerns with government. Nevertheless, whether there is indeed scope and a willingness on the part of government for a public-private partnership approach to drive agricultural infrastructure investment in the country’s post COVID-19 developmental agenda, remains to be seen.